Blackwell Fire & VFW come together for American flag on Doolin 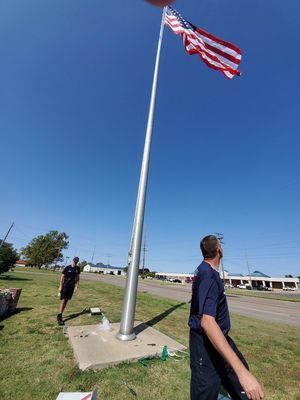 Those who came to town to celebrate Homecoming on Friday and Saturday were greeted by several familiar sights they might not have seen in a while – including Blackwell's iconic American flag flying over Doolin Avenue.

After Oklahoma's turbulent weather warped and tore the flag and flag pole during the summer, workers with the City of Blackwell were forced to take the flag down.

On Friday, “Old Glory” flew again. But without a new pole, the flag might not be flying for long, according to Veterans of Foreign Wars Auxiliary No. 2855 President Sherry Landers and Blackwell Fire Chief Cory Hanebrink.

“We had worked for about two hours this morning getting that flag up just in time for Homecoming,” Hanebrink said Friday morning. “Parts have been scarce for poles and set-ups like this due to COVID-19, so we finally got a temporary fix in place.”

Hanebrink praised the fire department for helping to set up the flag. He said he was happy to raise it again.

Landers said she hopes to raise funds for a new flag pole by selling her iconic homemade chicken and noodles. She prepares them in Nana's Country Kitchen, a food truck she parks annually at the Kay County Free Fair. On Friday, she parked it downtown for Blackwell’s “Back Home Bash,” a Homecoming block party along Main Street.

“The cost to repair the pole and get a new flag will be about $5,000 or more,” Landers said. “We're so thankful that Chief Hanebrink and the Blackwell Fire Department have been so helpful, and we hope the citizens of Blackwell will be open to helping us as well.”

More information about the food fundraiser will be available following the VFW Auxiliary’s meeting Thursday afternoon.

In the meantime, donations toward the purchase of a new flag and flag pole can be made to the Blackwell Fire Department or to the VFW Auxiliary. To contact the fire department, call 580-363-5490. To contact Landers, call 580-262-0121.