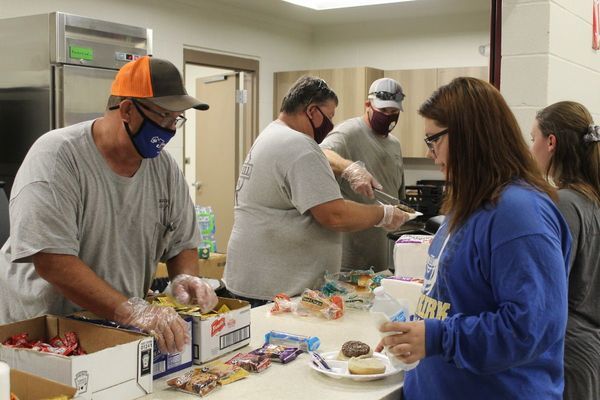 Workers with the Blackwell Public Power Department were honored throughout the first week of October as a part of Public Power Week, an annual nationwide endeavor from the Public Power Association.

Public Power Week culminated in an Oct. 7 customer appreciation event at the Blackwell Fairgrounds Livestock Pavilion, where hotdogs, hamburgers, and goodie bags were handed out. A documentary film highlighting the city’s electrical workers was shown to the public.

The film was a combined effort over the course of the last year from City Manager Janet Smith and Speak Now Productions in Ponca City.

“Blackwell is a city of stories,” Smith said. “This will not be the last video we release from Blackwell. We look forward to bringing the public more of our departments and our people in the future.”

"After interviewing the Public Servants of Blackwell, we were so moved by their story and we were excited to build something that would resonate with all the citizens of Blackwell. Janet Smith was our point person during the whole process, and her passion to give credit to the Public Servants, Citizens, and Heroes of Blackwell, who served during this difficult time, fueled this project. We hope it honors the Blackwell community for a very long time," Ashley Ballinger, Creative Director for Speak Now said in a statement.

The interviews and footage tell the story of the flooding, the around-the-clock work of Blackwell's municipal departments, and the search for the late Larry Larimore, after whom the Blackwell Fire Department’s rescue boat is named. Larimore died in May 2019 after floodwaters swept his vehicle off of Highway 177 north of Blackwell.

“This [is the] moving story of summer 2019's catastrophic flooding that left the City of Blackwell in the dark,” the City of Blackwell said in a post on its Facebook page, “a darkness that only made the heroism of our Hometown, America shine even brighter. This video, produced by Speak Now Productions, compiles interviews, footage, and dramatic recreations of the event, creating a story of one small town's refusal to quit.”

The video was published on Facebook Oct. 7 and has amassed more than 5,300 views, with more than 97 shares. The video is also available on YouTube with the name “City of Blackwell.” The producer on YouTube is listed as “SN Commercials.” The video may also be viewed by following this link: &feature=youtu.be

In a Facebook post, Steelmon praised the work of the electrical department, saying the workers’ efforts are greatly appreciated. He also thanked Blackwell citizens for supporting the department.