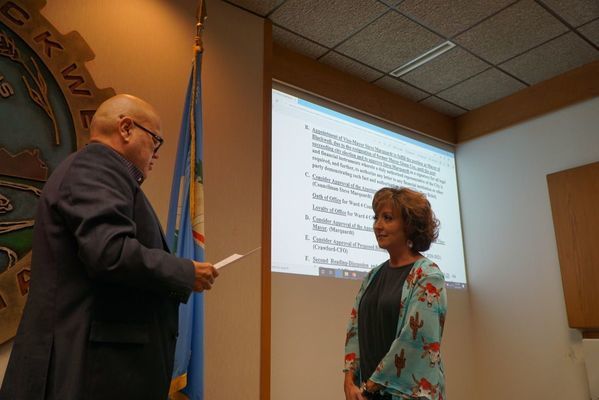 The Blackwell City Council met Thursday to swear in Steve Marquardt as mayor for the City of Blackwell and Julie Green as Ward 4 Councilwoman following the swift resignation of former mayor Glenn Cox earlier this month.

The meeting began with a work session at 5 p.m., where the Council discussed various items to be on the agenda at the 6 p.m. meeting. Council members also heard input from Blackwell resident Catherine Rickey.

Rickey inquired about the $70,000 purchase of nine acres of land on Ferguson Avenue and 13th Street across from the hospital, which the Council voted to purchase from Ed Urban. Rickey wondered why the cost was so high, and what the land will be used for.

Marquardt explained that the land was already zoned for residential development and had utilities built-in from a previous project. The land has already been surveyed and plotted for homes, streets, and more.

City Manager Janet Smith said that the city is interested in developing the land into housing, the need for which is being accelerated by the influx of new employees and businesses at Blackwell's Industrial Park. The employees will need homes to live in, she said.

Rickey then praised the spirit of the community, applauding the construction and care of the skate park at Memorial Park. However, she expressed concern about the Event Center at the county fairgrounds being “empty.” Smith encouraged Rickey to keep up with the city's Facebook page for event information.

The City Council meeting began at 6 p.m. An associate with Frank Crawford, the city’s chief financial officer, informed Council members that sales tax revenue was up again. She attributed the rise to the pandemic keeping shoppers local.

During the public comment portion of the meeting, the Council heard from Rocky Auterson, who informed the Council of his intent to run for mayor in the upcoming election. He also said he wanted to be appointed to the Ward 4 seat that Green was appointed to.

The Council then discussed the appointment of Marquardt to the office of mayor. Councilman Jon Webb said he wanted “some discussion” on the matter.

“It's been brought to my attention that there's been accusations against our city manager,” Webb said. “It was brought to [Steve's] attention, and I'm curious why you never brought it to the Council – and uh, so, I think it brings into question then, where is your loyalty lie [sic], to your people you represent, or your city manager?”

Marquardt replied that his loyalty is with the people he represents, those on the Council, and the city manager.

Webb said that Marquardt was knowledgeable of accusations brought against Smith. Marquardt asked what those accusations were. City Attorney Bryce Kennedy interrupted the interrogation by explaining that Marquardt’s appointment to the office mayor was put on the agenda at the request of Councilman Tom Beliel, and said that if Webb had a choice for mayoral nomination, he could have put it on the agenda as well.

Webb asked if he could suggest former mayor T.J. Greenfield. Webb said Greenfield had “very few less votes” than Cox and that the citizens would want him back.

According to the City Charter, people who are not on the Council may not be appointed to the office of mayor.

Marquardt was sworn in by Tom Beliel, who then filled the position of vice mayor.

The Council voted to appoint Blackwell resident Julie Green to the Ward 4 seat of the City Council. Marquardt said he had encouraged his “friend and neighbor” Green to fill the seat, which she enthusiastically agreed to.

Green was then sworn in with the oath of office and loyalty of office oath by Marquardt, receiving several rounds of applause from the audience.

The Council then heard the second reading on a voluntary subscription service for the Blackwell Fire Department’s responses made outside the city limits. The item was approved for $60 per year from county landowners for the BFD to respond to. Fire Chief Cory Hanebrink said it is “affordable insurance” and that the response from county residents and land owners had been positive.

The Council approved the Blackwell Police Department to go out for bid on body cameras and a video storage system.

The meeting concluded with discussion of going out to bid for demolition on properties at 216 South Fourth St., 513 West Lincoln Ave., 511 South Fourth St., 314 East Blackwell Ave., and 315 East McKinley Ave. Smith requested a motion to continue the item, so that more research could be done into the contractors who had bid individually on the sites.