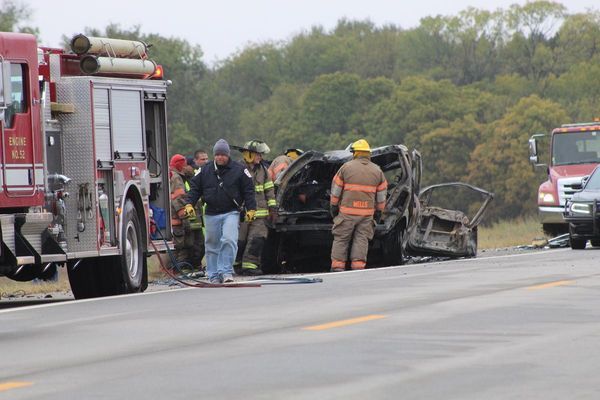 According to the Oklahoma Highway Patrol report, the accident happened around 10:33 a.m. on State Highway 11 between Waverly Street and Union Street, approximately three miles north of Ponca City.

The accident report states that Jerry Wayne Johns,73, of Ponca City was driving his 2013 Ford F150 when he crossed the centerline and hit a 2015 Ford Expedition driven by John Holden, 74 of Braman. Both men were pronounced at the scene due to the injuries sustained by Ponca City EMS after being pinned in their vehicles for approximately 3.5 hours before they were extricated with the Hurst tool. Both men were transported to the Oklahoma Medical Examiner’s Office in Oklahoma City.

The OHP report alleges an odor of alcohol in the Johns vehicle that was traveling westbound on State Highway 11 when it crossed the center line into the eastbound lane, then entered the eastbound shoulder, striking the Holden vehicle head-on. The Holden vehicle rolled, coming to rest on its top before catching fire. With the deceased victims being turned over to the Oklahoma State Medical Examiner’s office, it will be several weeks before any blood alcohol results come back on Johns.

A search of court records indicates this is not the first time, Johns has been driving under the influence as reported by the initial report. Johns was under court order to have an interlock device in his vehicle due to guilty pleas in January 2020 from a misdemeanor DUI-Aggravated charged in May 2018 and a felony DUI, Second and Subsequent charge from April 2018. These charges followed a 2014 guilty plea for DUI that also had a suspended sentence after serving three weekends in the Kay County Detention Center.

The felony DUI was for fiver years with the Department of Corrections (DOC) and multiple fines and fees totaling $2,259.25. There was also an obstructing an officer charge that was suspended. The April misdemeanor also had three other traffic violations that were not filed from the same incident. The April 2018 still had $964.50 in unpaid fines at the time of Sunday’s accident.

The OHP report indicates seatbelts not in use in the Johns truck and undetermined in the Holden truck. Airbags deployed in both vehicles. While the weather was reported as cloudy the roads were dry at the time of the accident.

The investigation is being handled by the OHP and the Kay County Sheriff's Office. The Ponca City Fire and EMS, Kildare Fire Department, and Newkirk Fire Department all responded to the accident scene.