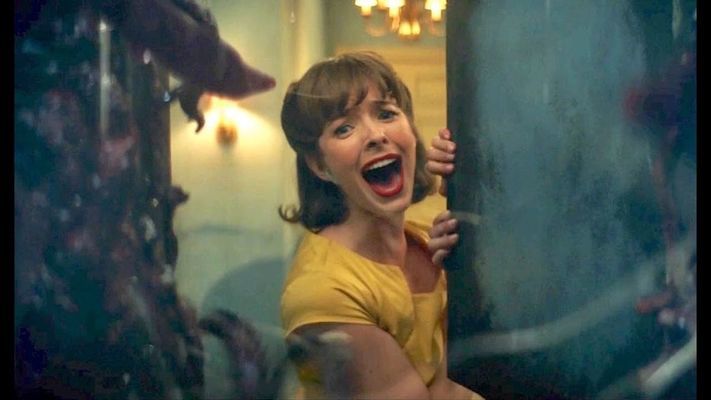 THE MORTUARY COLLECTION, released just in time for Halloween, is now streaming on the horror movie site “Shudder” which you can sample through either Amazon Prime or AMC Plus.

This spooky anthology film finds us in the sleepy, dreary, coastal town of Raven's End in a time that seems to be the 1980s. Here we find an extravagant gothic funeral home overlooking the town, run by a ghastly older mortician known as Montgomery Dark, played by Clancy Brown, who quickly dismisses his comical last name by telling us “it's a family name.”

After the service of a small boy, Dark meets Sam (Caitlin Custer), a teenager girl who has come in regarding the “Help Wanted” sign outside. Eager to test her might and to startle her, Mr. Dark begins to fancy her with ghastly tales of some of the bodies that have come through the hallowed halls over the years. Every corpse has a story, and these stories are all painstakingly documented in the home's dusty library, with decades and centuries of horror bound in leather.

The film is broken up with four tales from writer/director Ryan Spindell (The Babysitter Murders; 50 States of Fright) and deal with a mischievous pickpocket who gets more than she bargained for; a college playboy who learns a disgustingly gory lesson on the importance of safe sex; a man stuck caring for his vegetative wife that learns an important lesson on “til death do us part”; and a violent, action-packed, and twisty tale of a babysitter who must fend off an escaped inmate.

Anthology films are a tricky subject, with some often being the sum of their weaker parts, or eventually just losing track of their magic along the way. THE MORTUARY COLLECTION side-steps this by taking a very meta approach to the whole topic, with Dark's stories boring our protagonist Sam, who's seen it or heard it all before.

Atmospherically, the film is similar to last year's excellent SCARY STORIES TO TELL IN THE DARK but with a definite R-rating to allow it some more shocking horror. And boy there's horror. Gross-out body horror, creatively made zombie children, a slimy tentacle monster, and an exceptionally brutal fist fight punctuate this film which is less “scary” than it is wholly entertaining.

What THE MORTUARY COLLECTION really nails is set design. Every inch of this film looks authentic and lived in. The funeral home-mansion Mr. Dark resides in is sprawling and multi-layered, with tons of fleeting looks at mysterious books, eye-catching portraits, and symbolically stained glass. It's quite a thrill to watch as Mr. Dark and Sam trek through it, with the stories following them, darker and darker, until the end.

Ultimately, like any horror story, this one has some great messages and morals with it, and showed a very promising future in the genre for writer/director Spindell. This Collection also, of course, ingeniously sets up for a sequel that is sure to deliver more thrills and frights. There's enough of a 'lore' established in the town of Raven's End to keep this collection growing for years to come.