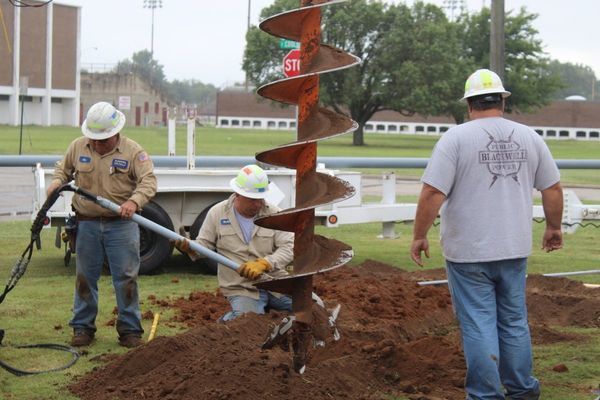 When the City of Blackwell's skate park at Memorial Park was completed, it instantly became a draw for the young and the young at heart – especially because it opened in the first weeks of the coronavirus pandemic, giving those on lockdown a chance to get some fresh air and exercise.

Now, as the old verse goes: “Let there be light.”

Blackwell Public Power Department Foreman Darrell Steelmon said installing lights at the skate park was a pleasure, and just another thing he loves about his job.

“I would notice, going home in the evening, that there would be a massive number of kids still skating there when it got darker,” Steelmon said. “So, we chose to move the skate park project up on our timetable to benefit the safety of the kids who would be up there skating as it got darker.”

Steelmon and his crew installed 14 LED lights over the span of a month. The lights are set on a timer to turn on at night. Seven of the poles placed there were repurposed from the tennis courts at the Beatty-Rodgers Park.

“The weather wasn't cooperating with us much, but we got everything cemented and trenched,” he said. “We still have to repaint the poles to make them really 'pop,’ but the project was done to help our kids. We will be painting once the weather allows for it.”

The skate park will also be receiving an expansion to the pump track in the coming months, as the site has increased in popularity, City Manager Janet Smith said.

“We are pleased that Memorial Park is proving to be a great investment for our residents and many tourists and travelers,” Smith said. “Seeing the park enjoyed by so many on a daily basis proves that a project like this was needed for the youth of our community. The high level of use the skate park receives is the main reason the lighting project happened so quickly.”

Smith thanked the employees of the Blackwell Public Power Department, as well as the workers with the Blackwell Streets & Parks Department, for the work they're doing to make the park the destination it has become today.

“Also, without the approval of the City Council in 2019, this great addition would not have been possible,” she said. “The Council should be applauded for their vision and belief in the value and worth of this community.

“I'd like to thank the tourism board and its skate park committee for bringing this project to the city's attention. They continued to believe it was worthwhile, despite years where nothing happened. Now, their hard work and dreams have come true.”

The City of Blackwell is planning to host and promote tournaments for the spring of 2021.