Review: LOVE AND MONSTERS is a charming apocalyptic love story 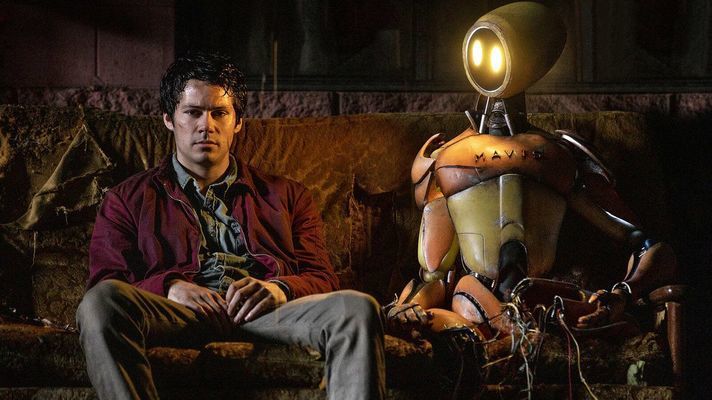 “Don't settle. You don't have to. Not even at the end of the world.”

This past week saw the simultaneous release of Paramount's LOVE AND MONSTERS on pay-to-view streaming services and a limited theatrical release. Taking a trip to the Cowley Cinema 8 in Ark City, I went into the film almost completely blind, and came out having seen one of the year's most creatively whimsical films.

LOVE AND MONSTERS is written by Matthew Robinson (DORA AND THE LOST CITY OF GOLD) and Brian Duffield (THE BABYSITTER) and directed for the screen by South African rising star Michael Matthews.

The film takes place almost a decade after the apocalypse, brought on by humanity bombing an impending asteroid out of orbit, only for the presumedly non-lethal fallout to trigger advanced and horrifying evolution in Earth's cold blooded creatures. Cockroaches, crabs, snails, and toads grew to the size of cars and houses, and even gave way to more terrifying creations.

In this apocalypse, humanity was kicked underground after the monsters “won”, and that's where we find our reluctant hero, Joel Dawson (Dylan O'Brien). An artist and a hopeless romantic, Joel is the only single guy in his underground vault, and lives on the hope he'll one day see his high school girlfriend Aimee. Joel is considered basically useless, due to his lack of combat prowess and general chicken-hearted nature.

Finally, after making his way through a list of survivor colony radios, he finds Aimee. Deciding that dying for love is more noble than wasting away in his bunker, Joel sets out on an 80-mile journey west to find his long lost love.

On the way, he meets an intelligent dog named “Boy”, and crosses path with a seasoned monster hunter Clyde (Michael Rooker) and a snappy young girl named Minnow (Ariana Greenblatt). The entire world is out to kill him, and Joel keeps an exhaustive diary on everything he encounters as the four of them make their way through a bizarre and mutated America in a hilariously endearing, sometimes chilling, and surprisingly poignant journey.

LOVE AND MONSTERS is akin to a PG-13 ZOMBIELAND with the snappy dialogue, irreverent sense of humor, and “Survival Guide” tips and tricks motif. It's when the film stops trying to mimic other “dark comedy” horror films like the aforementioned zombie odyssey or the more obscure A BOY AND HIS DOG blended with John Hughes, that it becomes the unique road-trip of self discovery it's meant to be.

I'll save you the trouble (SPOILERS) and mention that the dog DOESN'T die, so you don't have to worry about that. The film, however, does feature one of the more surprisingly emotional deaths of a robot I've seen in a long, long time.

The film does a fantastic job at juggling tones. Within 20 minutes, we see Dylan overcome his fears in a triumphant moment of self realization, befriend a dying robot in a tear-jerking meditation on grief and mortality, and then see him continue his heroes journey by putting his “monster knowledge” to the test.

None of that would be believable though, if it didn't have TEEN WOLF and MAZE RUNNER star Dylan O'Brien as the lead. O'Brien is plucky, unsure of himself, and dealing with the survivor's guilt of escaping the devastation that killed his family, and this is all emoted and carried out with what appears to be ease, but with any other actor it might have seemed too staged. O'Brien is a natural at this, and I think it goes without saying that he NEEDS to be in more work. He carries the “wide-eyed newborn” persona and, eventually, seamlessly transitions that into a “focused badass”.

Michael Rooker, a fan-favorite from TV shows like “The Walking Dead” and Marvel's GUARDIANS OF THE GALAXY films, is once again his lovable gruff self. His raspy voice and narrowed eyes carry stern wisdom and brief glimpses of passion and humanity. It's a comfort to watch him, as usual.

Newcomer Ariana Greenblat, who plays the little girl Minnow, is resilient and human as well. She's written as your typical “badass little girl”, but the way she performs the role makes this particular cartoon-like archetype a bit more relatable than usual.

Also, this film's special effects are top notch. Seriously. Some of the best prosthetic and CGI work I've seen in the past 10 years are done to bring these monsters to life.

LOVE AND MONSTERS culminates in an absolutely exhilarating final set-piece that brings everything we've seen in the film to a bold, beautiful, comedic, death-defying head. I loved it, every minute of it. It's the perfect “feel good during the end of the world” adventure that I think we deserve right now.

The film is available to purchase on Amazon Prime, iTunes, and other services. It is also currently playing in theaters.