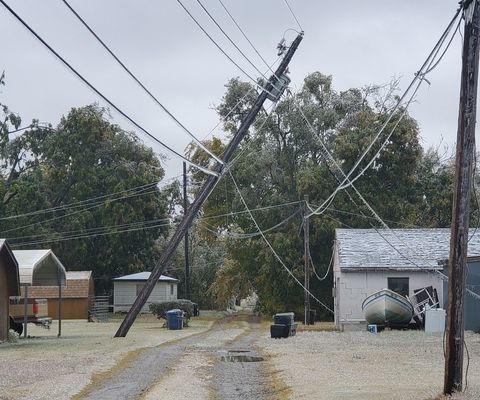 Oklahoma was in the dark last week after a sudden but powerful ice storm swept through most of the state, leaving about 300,000 people statewide without power.

Rain from Monday continued into Tuesday, freezing overnight, and leaving Blackwell covered in a sheet of ice. The rain didn’t stop, nor did the weather warm. Trees full of leaves began to freeze. Then, they began to crash to the ground.

Throughout Blackwell, the sound was like artillery fire, with branches shattering and splintering into frozen pieces, slamming into cars, homes, and bringing power lines down with them.

“We had close to 500 calls that Tuesday,” Chief of Police Dewayne Wood said. “To put it into perspective, that’s about a week to two weeks, normally, for us.

Police officers helped in any way they could, Wood said.

“When it got dark and crews needed lights, we were there,” he said. “When a power line would collapse and a street needed blocked off, we were there. Whatever anyone needed, that was up to us to help.”

“We were out clearing limbs from streets, helping clear roadways for our other departments to get to where they needed to go,” he said. “We loaned two of our guys to Blackwell Public Power, so for the six of us left, we stayed busy.”

“Everyone came together during this crisis,” City Manager Janet Smith said. “Our dispatchers in the police department and electric department, everyone upstairs and downstairs at City Hall – everyone was answering phones, directing people to where they needed to be or giving them information. Everyone did an exemplary job.”

Smith added: “We appreciate the public’s understanding in this as well. We appreciate people realizing this was going to take time. Every city in the surrounding area had these issues, too. Almost everyone was dealing with similar circumstances throughout the region.”

Workers with the Blackwell Public Power Department worked for more than 40 hours straight at the start of the storm, attempting to restore power to the city.

The city’s electrical department was assisted by crews from Wellington and Winfield, Kansas, as well as Bentonville, Arkansas, and Mooreland, Oklahoma.

“Tuesday morning, we started working,” Blackwell Public Power Department Manager Greg Sixkiller said. “We worked for over 40 hours straight through Wednesday night initially. At the worst of the storm, 85% to 90% of the city of Blackwell was out of power.”

“These crews that came to assist us … were integral,” he said. “Without their help, this would have possibly taken weeks. These guys were unstoppable.

“People say a lot that their community is the best, and most of the time that’s a cliché. Here, it isn’t – not in Blackwell. People say the men they work with are the best everywhere. … But here, it’s true. Every time I think these men can’t do better, they outdo themselves. I’m honored to work with them, and Blackwell is honored to have them.”

Sixkiller thanked the city’s employees for their teamwork. “We also want to thank David Keen, who was there the whole time helping us.”

“This ice storm brought everyone together,” he said. “We had the folks up at City Hall – Talyn, Lauran, Traci – doing everything they could to help us, to feed us, to take care of us. City Manager Janet Smith would call me constantly, checking on us. Our fire chief, Cory Hanebrink, would be out in the field checking lines, doing all that he could. Jerry Weiland was out there with him. Blackwell police would be blocking streets for us. Chuck Anderson let us borrow his men from the street department. … Everyone that could do something was going above and beyond.”

Sixkiller also thanked Blackwell residents who were supportive of the department and understanding of the situation.