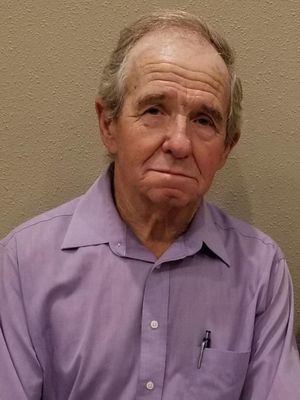 John Edward Holden, Sr. left this earth on the morning of October 18, 2020 due to a tragic motor vehicle accident. John not only joined his Heavenly Father that morning, but he was reunited with his bride of 51 years, on their 51st wedding anniversary.

John’s funeral service were held on Sunday, November 1, 2020 at 2pm at the Braman Methodist Church, followed by a brief graveside service at the Braman Cemetery. Services are under the guidance of Stittsworth Funeral Home out of Enid, OK. Pallbearers will be Jim Curl, Mike Barton, Rick Grell, John Smith, Rocky Wood and Jason Vermillion.

John Edward Holden, Sr. was born on April 5, 1946 in Wakita, OK to Mary Helen and Harold Holden. He grew up on the family farm, and graduated from Wakita High School in 1966. John married the love of his life, Deborah June, on October 18, 1969 at the Pond Creek Baptist Church.

They celebrated their 50th wedding anniversary last year surrounded by family and friends, just two months before Deborah left this earth. During their 50 years of marriage, John and Deborah raised six children together, who then blessed them with 16 grandchildren and five great-grandchildren. John cherished each and every one of these kids, and they sure loved their grandpa.

John was preceded in death by his parents and his wife, Deborah Holden, who passed away December 29, 2019.

In lieu of flowers, please consider donating to The John Holden Family Memorial Fund set up at BancFirst.