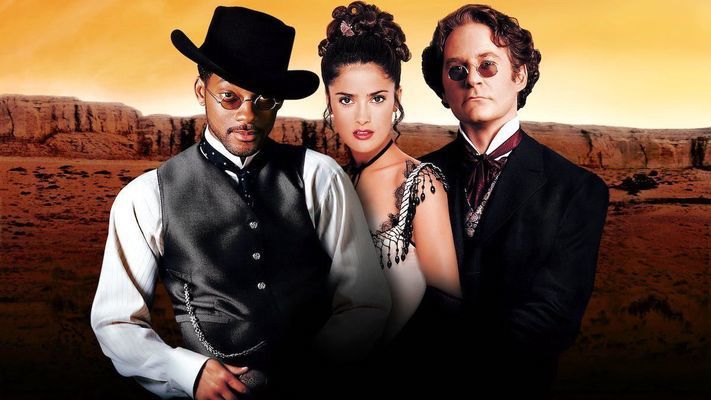 “And you, West, not every situation calls for your patented approach of 'shoot first, shoot later, shoot some more and then when everybody's dead try to ask a question or two'.”

In a new weekly segment, I'll be taking a look at films that could NEVER be made today. These are films that are politically, racially, and socially 'racy' and taboo that a generation ago made for fine entertainment, but in today's more sensitive world, are offensive black marks in the Hollywood catalogue.

This week is WILD WILD WEST, the 1999 action-adventure film that starred Will Smith as James “Jim” West, a renegade federal agent, and Kevin Kline as Dr. Artemus Gordon, a technophile lab-geek who make an unlikely duo in a post-Civil War America who must stop a Confederate mad scientist from taking over the world.

Based on the short-lived, campy, 1960's TV series of the same name, this film should have been a sure-fire win for Warner Bros.

Banking on Will Smith's meteoric white-hot popularity from his slew of blockbusters including BAD BOYS, MEN IN BLACK, ENEMY OF THE STATE, and INDEPENDANCE DAY in previous years, the studio dug up an old property with a steampunk spin and a killer set of chart-topping songs to promote it including Enrique Ingleseas' “Bailamos” and Will Smith's own “Wild Wild West”.

This should have been the next big franchise for WB...and instead became a critical and financial misfire, frequently lauded as one of the worst movies ever made.

Similar fates befell other TV-reboots including LOST IN SPACE and THE AVENGERS (the British one).

I'm here to tell you, however, that WILD WILD WEST is an amazing motion picture. It's bold in it's shameless camp, and it is especially shameless in it's presentation.

There is something so shocking about seeing the racist Confederate antagonist R. Less Loveless (played shockingly by British thespian Kenneth Branagh) in his wheelchair mounted to mechanical spider legs sparring verbally with Smith's Jim West with double-barreled exchanges like:

“I haven't seen him in a coon's age!” and “I'd hate for you to be a slave to your disappointment!”

only for West to reply with

“Well, I can see where it'd be difficult for a man of your stature to keep in touch with even HALF the people you know!”

It's bliss. It's hilarious. The hilarity here comes from the fact that this antagonist is so comically evil, and it works well with the film's decision to race-swap the original Jim West (played by Robert Conrad). Race plays a big role in the movie, without the film relying on it as a preachy crutch.

We know the Confederacy were the “bad guys”. This movie isn't making a statement- for Christ's sake everyone is so COMICALLY over-the-top sadistic. Our heroes are so COMICALLY cool and badass that this doesn't matter. It's a live-action cartoon.

The villain has a GIGANTIC WALKING SPIDER MACHINE. I shudder to think of this film being pitched today. People would absolutely riot. In the vein of “blaxsploitation”, I think WILD WILD WEST deserves an exploration, especially in the wake of series' like HBO's WATCHMEN or films like DJANGO UNCHAINED.