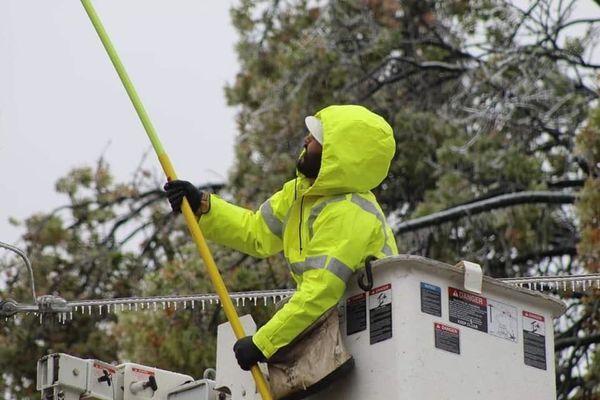 We’re lucky to have a little light in our lives, and we have our city’s hard-working electrical linemen to thank for it.

Linemen with the Blackwell Public Power Department battled heavy rain, snow, and ice last week to restore power to local homes after a rare October storm downed most of the city’s electrical system.

Falling trees and ice caused power lines to sag and snap, shutting off power to thousands of Blackwell residents. With help from electrical crews from Kansas and Arkansas, the city’s electrical workers were able to restore power to most of the city in just a few days.

That may seem like a long time, but given the challenges the linemen faced in getting Blackwell’s electrical grid back online, it’s a tremendous feat.

Greg Sixkiller, the supervisor of the department, said he’s proud of the work his men have done. Still, he shrugs off the notion that they’re heroes.

Despite his humility, I think most of us agree that the city’s linemen are Blackwell’s unsung heroes during times of crisis. They risk their lives mending broken electrical lines in the worst weather imaginable so that we can stay warm and dry in our homes.

Several days before severe weather hammered the region, the city celebrated Public Power Week, which honors the electrical workers across the United States who empower our lives.

Puns aside, every week should be Public Power Week. Our linemen deserve the highest of commendations for their work. Thank a lineman today.

ATTORNEY GENERAL WARNS OF FRAUD IN WAKE OF STORM

Oklahoma Attorney General Mike Hunter said he is urging Oklahomans to use caution when hiring contractors to repair their property after recent ice storms swept across the state.

“Criminals see things like ice storms as an opportunity to make money,” Hunter said in a news release. “They prey on people’s emotions and frustrations in a sinister pattern of behavior. They will go door-to-door, use high pressure sales tricks, [and] require large amounts of cash up front to make repairs quickly or remove debris, among other tactics.”

To avoid being taken advantage of by fraudulent contractors, Oklahomans should ask for contractor referrals from trusted family members and friends, Hunter said.

He also encourages property owners to obtain written estimates from contractors, avoid hiring “fly-by-night” companies, and be wary of contractors who ask for up-front payments.

Property owners should make sure that roofers are registered with the Oklahoma Construction Industries Board, which can be reached via phone by calling 405-521-6550. They can also check the agency’s online database by following the link https://cib.ok.gov/are-they-licensed.

“I know it’s hard right now with a lot of people without power or wanting to get repairs made to get back to normal life,” Hunter said. “But I encourage Oklahomans to remain patient and be cautious when choosing a contractor. If someone does become the victim to contractor fraud, contact my office. We will do what we can to get their money back and prosecute the individuals committing the crimes.”

To file a complaint, contact the attorney general’s office via phone by calling 405-521-2029 or via email by using the address consumerprotection@oag.ok.gov.