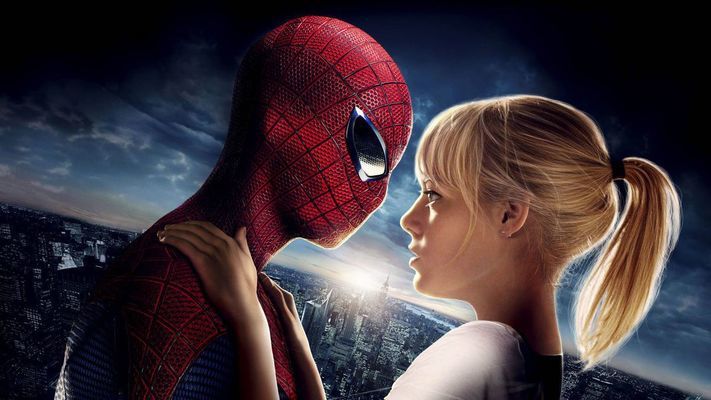 “Secrets have a cost, Peter. They're not for free. Not now, not ever.”

THE AMAZING SPIDER-MAN (2012) and its sequel THE AMAZING SPIDER-MAN 2 (2014) are films that get a lot of flack. Deservedly so, maybe, in the cast of the latter. But despite Sony's “too many cooks” approach to the 2014 misfire that lead to Spider-Man joining the Marvel Cinematic Universe, I think it's time we give credit where it is due to these two comic book films.

Conceived after Sam Raimi's planned SPIDER-MAN 4 fell apart in the last years of the 00's, THE AMAZING SPIDER-MAN took the then-hot Christopher Nolan BATMAN BEGINS approach to reboots. Sony wanted Spider-Man to be darker, edgier, sexier, and more conflicted. This of course is a stark contrast to Sam Raimi's jovial and high-spirited trilogy.

What we got was a pessimistic film about the failures of being a hero. About the real cost of putting on a mask and fighting crime. “Spider-Man” and “Peter Parker” are two sides of the same coin, of course, but in TASM Spider-Man becomes Peter Parker's burden. His outlet. His curse..and eventually, his salvation.

In Sam Raimi's original SPIDER-MAN film, Peter takes to the streets after Uncle Ben is gunned down, finds his killer, and takes him out. The book is closed on that, then he focuses on being a hero. In TASM, Uncle Ben's killer escapes justice. Forever. Peter sets out to become a vigilante, a terrifying force of revenge, to satisfy his needs to place a name to Ben's death besides his own, as Ben was gunned down roaming the streets looking for Peter after an altercation.

Andrew Garfield's Peter Parker never finds this killer. He only has to live with his guilt of being almost solely responsible for Ben's death. His coping mechanism comes in the form of Gwen Stacy (Emma Stone), a beautiful girl Peter has been in love with for years. Gwen invites him to a family dinner, with Gwen's Police Captain father, George Stacy (Dennis Leary).

Captain Stacy and Peter get into it over the effectiveness of the Spider-Man's vigilante justice in the face of actual public defenders who wear a badge and follow codes. To get Peter out of the fight, Gwen takes him to the roof where they share their first kiss, after Peter tells her that he's Spider-Man. He does this in a way to impress her, and to contextualize the fight he had with her father. It's a beautiful moment, but you almost understand Peter is telling her for his own sake, not for hers.

As Gwen gets called back to dinner, she turns to look at Peter, expecting him to share her adoration and longing. Peter, instead, hears sirens in the distance. In this moment, Peter chooses Spider-Man over himself, and over Gwen. While that may sound selfless, is it really? The sirens mean a chance to catch Ben's killer. The sirens mean redemption. Peter leaps from the roof, and finds himself in a battle with The Lizard, where the terrifying creature knocks a car nearly into the water. Abandoning his pursuit against The Lizard, Peter rescues a little boy as the car dangles in flames like an ornament. He tosses the child his Spider-Man mask: “Put it on,” Peter says, “it'll make you strong.”

This shows the audience without a doubt that Peter and Spider-Man are disconnected, and Peter knows that. The mask, he says, is what makes someone Spider-Man. The mask is another person, another identity. Put the mask on, and you'll be someone greater than yourself. You can escape.

It's not “who” Spider-Man is, it is “what” Spider-Man is. In 2018's mind-blowing animated film INTO THE SPIDER-VERSE, the film's entire lesson is based around that message. The title of “Spider-Man” comes with a cost. It destroys those under it...but that it means to those who see it is far more important.

Peter Parker fails. He fails throughout the entire movie, and in the sequel. He fails to keep promises, he fails to keep the ones he loves from danger. But Spider-Man doesn't. Spider-Man begins as a outlet of rage and aggression, and becomes an icon for hope. Peter Parker, at least Andrew Garfield's version, doesn't come to terms with that until the finale of TASM 2...and we never see what happens after that. There was no TASM 3.