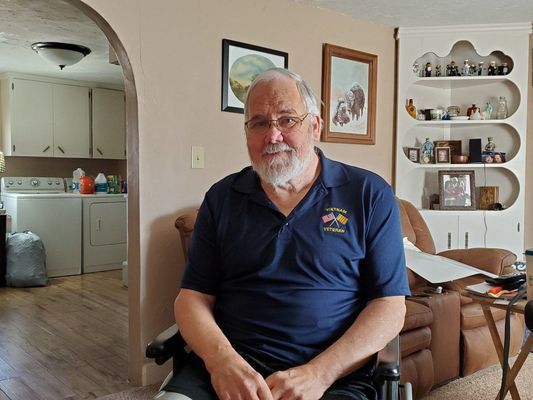 Robert Dean McBride, a U.S. Navy veteran who served during the Vietnam War, has been chosen as the parade marshal for the Blackwell Veterans Day parade.

McBride was raised in Blackwell, and he joined the military when he was 18.

“I had an uncle who was in the Navy, and I always respected him,” he said. “I looked up to him in a lot of ways, so I wanted to join the Navy to sort of follow in his footsteps, so I joined before I was drafted into something else.”

McBride, who earned the rank of E3, served in the Navy for three years in Guam and Vietnam. He served onboard a nuclear submarine and on a fueling ship, which he referred to in good fun as a “glorified floating gas station.”

“The camaraderie, the friends I made – it was a pleasure to serve my country, and to serve alongside such great people,” he said.

McBride said he was humbled to be selected as parade marshal, and it was something he didn't take lightly.

“When I was told, I was incredibly moved and honored,” he said. “I'm very proud to be the parade marshal. It's something I've never done before either, so that's very exciting to me.”

McBride, who said he is good with his hands, spends his spare time woodworking as well as making small crafts and figurines in his garage. He said this is relaxing and fun.

McBride is a member of the Blackwell Pentecostal Church. He volunteers there and with the local food bank. He is also a member of Blackwell's Veterans of Foreign Wars Post No. 2855.

The Veterans Day parade will begin at 11 a.m. on Nov. 11 on Main Street. The VFW will sponsor a community bean feed immediately following the parade at the VFW on West Ferguson Avenue.