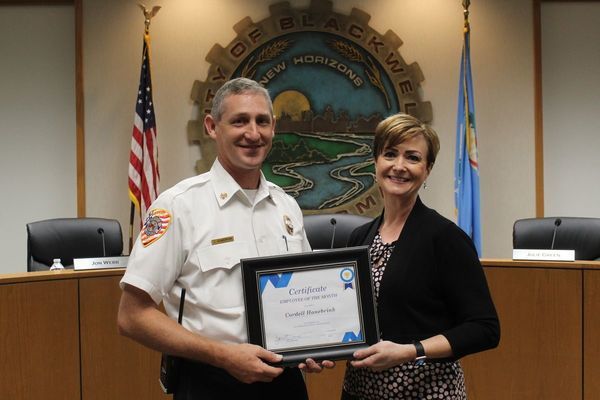 The Blackwell City Council met Thursday to honor Fire Chief Cory Hanebrink as the city’s Employee of the Month, and to purchase state-of-the-art body cameras for officers with the Blackwell Police Department.

The meeting began with Mayor Steve Marquardt thanking the city’s staff who were at the meeting. He also thanked all of the city’s workers for their efforts during the late October ice storm that left 90% of the city without power for several days.

“There is so much that goes into the emergency management part of his job,” Smith said. “It's a tremendous responsibility that he has, added onto his role as fire chief. It's a responsibility to the people of Blackwell, to the city employees. He works closely with [the Department of Environmental Quality], and they're not always easy to work with.

“It's Cory's ability to be so helpful in any situation that would overwhelm almost anyone else, so I want to recognize him for all he did last week to help us during the ice storm.”

The Council heard reports from various city department officials, beginning with Melissa Hudson, the director of the Top of Oklahoma Historical Society Museum. She said she wants to place more than 450 flags on the museum’s lawn for Veterans Day on Nov. 11.

Following Hudson, Code Enforcement Officer Jerry Wieland said repairing damage from the ice storm was a combined effort by all of the city’s departments. He said Electric Department Manager Greg Sixkiller has “the best men around,” a remark which received applause.

“I've gotten to work with a lot of groups in my life,” Wieland said, “but to see those guys go out and do what they did all week with the effort they put in was phenomenal to watch and to be a part of.”

Wieland said that, this time of year, the code enforcement department takes a nose-dive as the colder weather stops grass from growing. He said tree limbs and inoperable vehicles are usually hit hard.

Hanebrink spoke next, saying it was a pleasure to serve the community. He gave the fire department’s report, which showed that call numbers spiked because of the ice storm.

The Council also heard from Chuck Anderson, manager of the City of Blackwell’s Streets and Parks Department, who discussed the ongoing work at the Blackwell Softball Complex. He also discussed various street repair projects, including one on Oklahoma Avenue.

Sixkiller gave the final report of the night. He became emotional as he recounted the ice storm, thanking everyone involved in the repair efforts. He individually thanked all of the men and women involved from every department and organization before receiving a round of applause. A comprehensive story on the ice storm was published in the Nov. 4 edition of The Journal-Tribune.

After hearing reports, the Council voted to purchase or buy back unused employee vacation time.

The Council then voted to notify the Kay County Election Board of the general city election on April 6, 2021. The positions of mayor, 3rd Ward Council member, and 4th Ward Council member will be on the ballot in that election. A primary election will take place Feb. 9 if more than two people run for an office.

“Frankly,” City Attorney Bryce Kennedy said, “Blackwell is late to the game. It is recognized as a real benefit to the community.”

Hanebrink agreed. He said those who need medical assistance will be helped by not having “another bill” to calculate.

Smith said several members of the community have approached her requesting a similar service.

The Council also voted to seek bids for fans, heaters, and airflow modifications to the Livestock Pavilion at the county fairgrounds.

Finishing out the meeting, the Council approved an $80,000 purchase of state-of-the-art police body cameras from Axon Enterprises. The Council also voted to solicit bids for a tandem-axle dump truck for the streets and parks department.

Council members Tom Beliel and Jon Webb were not at the meeting.