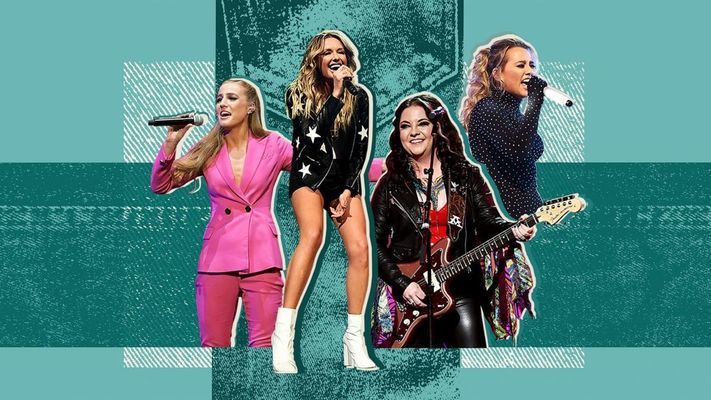 After watching the CMA Country Music Awards's last week, I decided that we should stop giving credit to people like Luke Combs.

The Country Music Awards Country Music Awards (I assumed CMA stood for that already and I'm, not changing my mind) had several great performances including newcomer Ingress Andress choking up during her powerful “More Hearts Than Mine”, an incredibly personal breakup song as well as Ashley McBryde's rousing “One Night Standards”...then of course Chris Stapleton doing another song that sounds exactly like his other songs. And Keith Urban well...singing another song that sounds exactly like every song he's done in the past 5 years. Then Eric Church won Entertainer of the Year for being so entertaining with all of his...identical songs.

I understand country music has gone through sort of a weird phase lately, with a majority of people making the switch to red dirt, red dirt artists getting famous- big- and either completely crashing under the weight (Turnpike Troubadours) or making a seamless transition to the big leagues but losing some of that edge (Stapleton).

Because of this, the male country music stars, now taking back seat to the bearded cowboys of red dirt, have been almost completely neutered to the point of being unrecognizable. There's no “grit” or naturalism to them anymore. No creativity. But the women of country music have shown nothing but.

Many like to point out that “pop country” artists like Luke Bryan, Florida Georga Line, or Old Dominion have ushered in the era of toothless country music, but I beg to differ. I did a piece earlier in the summer that no one read about how enthralling Luke Bryan's “One Margarita” was, and declared it as the Song of the Summer. What I should have done a piece on was “One Night Standards”.

This past year, male country artists have had nothing to really “say”.

I argued back in the far off year of 2015 that women had better breakup songs in country music comparing that year's “Redneck Crazy” by Tyler Farr to Little Big Town's “Girl Crush”, and it remains true to this day. One was a “breakup song” with lyrics like “You know you broke the wrong heart baby, and drove me redneck crazy” one was a creative, and tragic, ballad with lyrics like “I want to drown myself in a bottle of her perfume”

“This broke heart fool, on an old bar stool. Drinkin' beer almost as cold as you”; “Well, it takes one hand to count the things I can count on. But I got one hand that's gripping down on a cold one”

Then you have the aforementioned one-two punch of Ashley McBryde's “One Night Standards” and Ingrid Andress' “More Hearts Than Mine”. The former is about an emotionally scared woman who rejects the slut-shaming nature of one night stands into a code for herself.

The latter is a tragic, gut-wrenching song performed from Andress' heart where she tells her boyfriend of six months about what to expect when they visit her family. It starts innocently enough until you realize they've broken up, and the lyrics take on more weight especially by the end with

“And if my dad sees me crying; He'll pour some whiskey over ice and Tell a lie and say he never really liked you; Oh, if we break up, I'll be fine; But you'll be breaking more hearts than mine.”

It was that part at the end where Andress voice cracked and she began to cry during her CMA performance. It was emotional. Powerful. Spellbinding.

But who did Entertainer of the Year go to? Eric Church. For “Hell of a View” among others. For what? A song about a guy strummin a guitar with lyrics like “smoked my Bronco tires” and “let's paint [the town] red tonight”. Album of the year, of course, gos to Luke Combs. But why? They said nothing. They did nothing.

We've come a long way in country music since Maddie & Tay's feminist pop-country takedown “Girl In a Country Song” that made fun of male country singer's copy+paste lyrics. But not far enough.