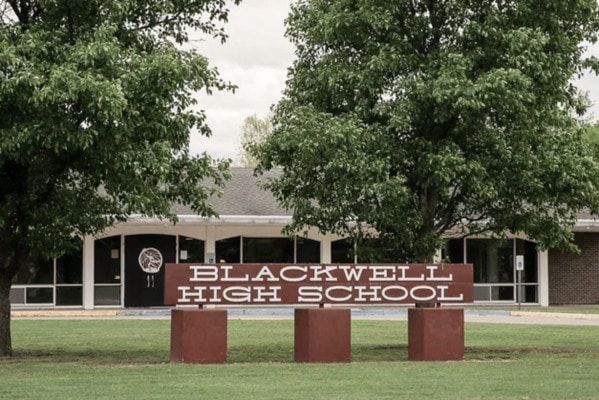 Blackwell High School students will switch to distance learning for the remainder of the semester starting Wednesday because both of the school’s principals have been exposed to the coronavirus, school officials said.

Superintendent Shawn Haskins said Tuesday afternoon that neither principal has tested positive for the virus.

Haskins said Blackwell Elementary School and Blackwell Middle School students will continue in-person learning unless active coronavirus case numbers rise at each school. He said administrators will continue to monitor the number of cases at the schools on an hourly basis.

The decision to shutter in-person learning at the high school came four days after new active cases of the coronavirus were reported across the school district. As of Tuesday afternoon, seven students and staff members had tested positive for the virus, and 75 others were in quarantine, according to information posted on the district’s website.

The new cases were reported Friday, according to information on the district’s website. The district does not separately list case numbers among students and staff.

“I know there’s going to be a bunch of gossip, ‘They shut it down because of the COVID rates,’” Haskins said. “Actually, our numbers are still lower than what they were three weeks ago as far as quarantine and positive.”

“We’ve had some practice distance days built into our schedule,” he said. “The high school kids know what to do. … We’ve rehearsed it. It’s kind of like doing a fire drill.”

The district also canceled a high school basketball game scheduled for Tuesday night because the school did not have enough administrators who could control the crowd at the game. The Perry Wrestling Tournament set for this weekend has also been canceled.

“We just can’t have school safely without them,” Haskins said.

Haskins said Tuesday morning that he could not identify the students who tested positive for the virus – or the students who are in quarantine – because of federal and state healthcare privacy laws.

He said he urges parents to keep their children from attending large gatherings where social distancing is not enforced.

“Our parenting style needs to change a little bit during this,” he said. “The parents need to be more aware of what their kids are doing and where they’re at. I still want them to be kids, but during COVID – the numbers are high in our community. I still want to keep the doors open. Coming to in-person school is the best thing we can do. I want to keep doing it as long as we can, but if there comes a tipping point where we have to stop, we’re going to have to stop.

“We need the parents to kind of help us.”

Haskins also said he is asking parents to keep their children home if they feel sick.

“The elementary [school] is telling me that they’re having some kids come to school who don’t feel well,” he said. “Typically, in a normal year, we send those kids and say, ‘Go tough it out and see what happens. If you get worse, call me.’ But in COVID times, if your kid says, ‘Hey, I don’t feel well, got a sore tummy or sore throat,’ you’ve got to keep them home so we don’t spread it to somebody else. We have to parent different during COVID.”

“If you had somebody that tests positive on Sunday or started having symptoms on Sunday, you have to go back 48 hours, and they all were at school on Friday,” Haskins said. “That’s how it affects us. Let’s say that kid doesn’t show symptoms until Monday or Tuesday, but yet they don’t come to school Monday, and you were out Saturday and Sunday. Then it doesn’t affect us at all."

For these reasons, the number of students who are in quarantine may be higher than reported at some school sites, Haskins said.

As of press time, data from the Oklahoma State Health Department showed that Kay County had 2,121 cases of the virus, 350 of which are active. Officials said 1,745 Kay County residents have recovered from the virus, and 26 have died from it.

The state health department does not provide data on coronavirus cases in some of the state’s smallest towns, including Nardin in Kay County.

The United States has nearly 15 million cases of the virus. More than 284,000 Americans have died from it, and more than 5.7 million have recovered from it.