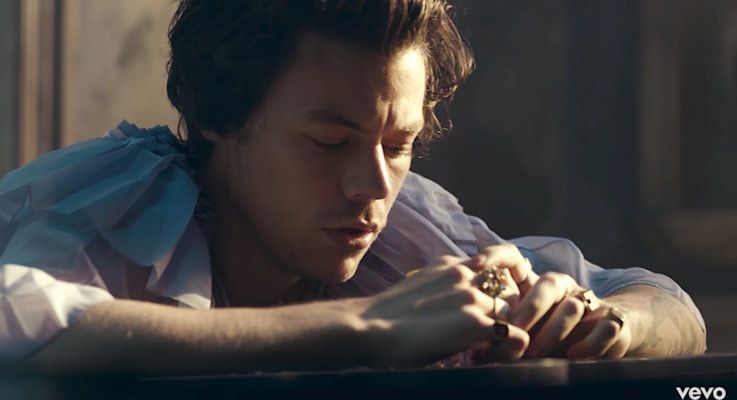 This week, we will be discussing Harry Styles. The former member of the greatest British pop band of all time, One Direction, has made quite the splash in headlines recently with his affinity towards breaking down gender norms by wearing “womens clothing” and generally just being eccentric. I'm not talking about that though, because I don't care and neither should you.

While Styles is currently filming Olivia Wilde's DONT WORRY DARLING and has been seen in Christopher Nolan's 2017 war epic DUNKIRK, his acting comes second to his heartbreaking albums, which I have dedicated to someone for as long as I can remember.

These two, the greatest breakup albums of all time, are his 2017 self-titled debut solo album “Harry Styles” and his slightly darker 2019 followup “Fine Line”, both of which have spawned singles ranging from poppy to tear-soaked.

While One Direction were no strangers to rock-out hits like “Best Song Ever”, “Live While We're Young”, “Perfect”, and “What Makes You Beautiful” their discography was also deepened with more personal and reflective ballads like “Night Changes”, “Summer Love”, “Fool's Gold”, “Story of My Life”, “Little Things”, and “Where Do Broken Hearts Go?”

These songs dealt with long-lost love, unrequited love, regret, one night stands, growing older, and the raw desperation of losing your true lover.

Harry Styles came out swinging in his self-titled debut with “From The Dining Table”, “Sweet Creature”, “Two Ghosts”, and “Sign of the Times”. But these songs aren't as different contextually as One Direction's bittersweet tearjerkers. Because they all seem to be written about the same person.

“From the Dining Table” we hear Styles lament that the woman he loves has given her new lover his old t-shirt, and he wallows in drunken self-pity in a hotel room over her.

Theres a sense that these two have been separated for a while, and this is reference again in “Two Ghosts” where he seems to meet his lover again, but they idly chit-chat without saying what's on their minds. These two songs seem to be the ending of what he sang about in “Sweet Creature”, a slow and folkier tune about the fact he knows he and his lover belong together despite their arguments and differences.

“Sign of the Times”, the chart-topping single from the debut album, seems to reflect a bitter finality with the relationship in question, with Styles acknowledging that while she's not good for him, and their relationship is under constant attack, “we can meet again somewhere, somewhere far away from here.”

Now, it appears two years later in “Fine Line”, Styles is still reflecting on this one great love. He even references in “Falling”, the emotion in his guttural lyrics, “and I'm well aware I write too many songs about you.”

While the Fine Line album is a bit peppier and sexier, it is not without Styles' continued devotion and anguish to his great muse. “Falling” is a darker continuation of “From The Dining Table” as Styles struggles with his alcoholism and despair, falling further into heart-ache at the absence of his lover.

With “Cherry” from the album, Styles is aware his lost love is in a new relationship, begging her not to call her new lover the things she called him. “I confess I can tell that you are at your best- I'm selfish so I'm hating it.”

This is the first time Styles takes aim at his own insecurities and anger, though. He does back this up again in the album.

In “To Be So Lonely”, Styles seems to send a desperate message to his muse, “Do you think it's easy being the jealous kind?”, before adding that “I'm just an arrogant son of a bitch who can't admit when he's sorry.” This is arguably his most self-deprecating turn.

Similarly, “Sunflower vol. 6” and “Canyon Moon” act as small footnotes in his love story that Styles has painted for us across two albums, both of which allowing him to recall small things and moments with his lover that are more upbeat but none-the-less as depressing.

While we're far from seeing the last of Harry Styles, it is fascinating that someone can be so in love, for so long, and remain so dedicated to digging into his painful, beautiful, soul for this music. Whatever comes next, myself and his millions of fans will be waiting with tissues.