What will you add to your scrapbook of memories? 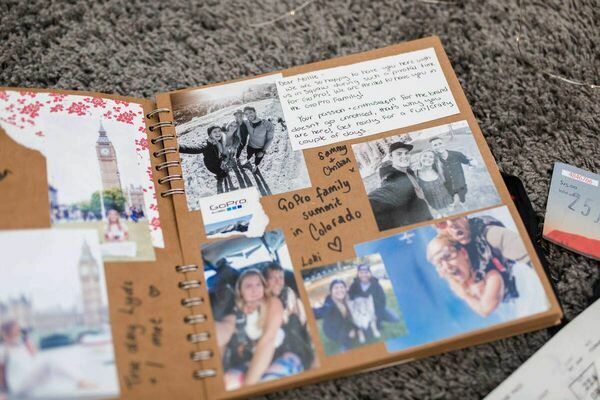 Editor’s Note: This column originally appeared in the Dec. 11, 2019 edition of The Journal-Tribune.

On Monday afternoon, I sat down to listen to one of my favorite songs. It had been a few months since I had last heard it.

Before the music began, a speaker gave a brief oratory. Here’s what he said: “Memories are the scrapbooks of our lives. Life’s journey is a series of snapshots, and when pasted together, help define who we are. Sharing memories with others is a way to share life itself. What kind of memories are in your scrapbook of life?”

I listened to those words intently. Then, I decided it was time to go back through my own scrapbook.

After listening to the song, I sat down to pull some pictures off of my camera’s SD card. I only had a few to pull off of it. But there are more than a few pictures on the card – close to 2,000, to be exact.

Those 2,000 photos tell a variety of stories. Some show my mother bottle-feeding and loving on her pet calf, Dollie. Some depict happy, playful little kids picking up brightly-colored pieces of candy off of the street from a Fourth of July parade. Some capture the moment a soon-to-be-mother found out that she was having a baby boy.

But of all the photos, the ones that mean the most to me are some that I took in July of this year.

Five months ago, I set out on a road-trip down Route 66 in my trusty pickup. My destination was the lovely little town of Sayre, Oklahoma. That’s where I was born, and where I spent the first three years of my life. I was heading back there to celebrate the 50th wedding anniversary of my maternal grandparents, Jimmy and Patsy Dean. I took all of the photos of their anniversary, capturing smiles, laughs, and tears of joy.

As I looked back over those pictures, I felt like I was looking back in time. It had only been five months since I had taken them. But in these last five months, my life has changed. A lot. Really, it’s changed more in the last five months than it did in the first 19 years of my life.

Soon after that July celebration, I left the United States for the very first time. My family and I took a cruise to Honduras, the Bahamas, and the Gulf of Mexico for my senior trip. I saw crystal-clear blue ocean waters and lush, green forests; I tried some of the most marvelous seafood man has ever known; and I learned about the cultures and customs of other people. It’s hard to find a good word to describe how magical that experience was.

Just a week after getting back from my senior trip, I embarked on yet another incredible journey. I had been accepted into the President’s Leadership Class at Northwestern Oklahoma State University, and those of us in the class took a trip to Boston. We learned about the men who founded this country – brave men like Paul Revere, who rebelled against British tyranny to give us the right to live in a free country. And we saw historical sites like the John F. Kennedy Museum, dedicated to memory of one of our nation’s finest leaders. That was a humbling experience, and I was able to meet some good people along the way.

But those trips weren’t the biggest changes. Two weeks after returning from Boston, I

said goodbye to the comforts of home in search of a new life: I started college. Fresh out of high school, I wasn’t sure what I had gotten myself into. But I adapted to my new environment quickly. I learned how to manage my time better, and I learned all the places that give out free food.

All jokes aside, the most important thing I’ve done is make new friends. One of the most valuable lessons I’ve ever learned is that you can’t go through this game called “Life” alone. In these last five months, I’ve made some incredible friends – the best ones I could ever ask for. Friends who will tolerate my endless ramblings about trains, tractors, and newspapers. And friends who will indulge me in my elementary – dare I say “crass” – sense of humor.

I’ve also grown a lot as a journalist. In these last five months, I’ve covered some major stories, all with the goal of delivering the truth to the people. I’ve learned just how important it is to dig deep to get a good story, and I’ve learned that people don’t always appreciate those who tell the truth – especially when the truth does anything but set them free.

It’s hard to summarize what has happened to me in the last five months. My life hasn’t changed completely; I’m still the Jordan Green that everyone likes – or dislikes. But I’ve come to better understand who I am as a person. I’ve done some good journalism. I’ve made new, lifelong friends. And I’ve learned more about the world around me.

Looking back over those photos was an experience unlike any other. On one hand, it feels like it was yesterday that I was back in that church. On the other hand, it feels like it was a lifetime ago. The fact that our hearts can make us feel so many different things at once is hard to fathom. It takes a lot of self-reflection to get to the bottom of those feelings – to get to the heart of the matter.

For me, five months seems like a century ago. But who am I to talk? My grandmother has had to put up with my ornery grandfather for 50 years. I can’t imagine how she must feel!

Looking back in the rear-view mirror has put some new things into focus for me. Life changes, and it changes quickly. That’s why it’s important to pause and reflect from time to time. We can’t live in the past, but we can’t forget where we’ve come from, either.

Above all else, I’ve learned to treasure life’s precious moments. Whether it’s a wedding anniversary or just a fun time with friends, we’re always patching together our own scrapbook of life.

What will you add to your scrapbook?