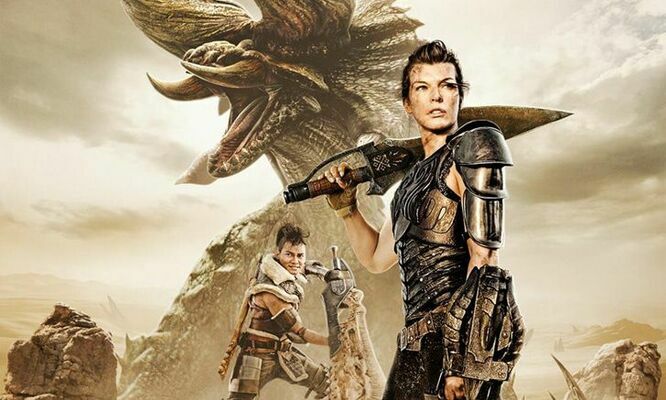 This past weekend saw the release of Paul W.S. Anderson’s thrill-a-minute MONSTER HUNTER, loosely adapted from the niche-turned-sensational video game series of the same name from Capcom.

MONSTER HUNTER follows a group of Army Rangers lead by the fearless Artemis (Milla Jovovich) who mysteriously get transported into “The New World”, a fearsome and fantastical place inhabited by monsters ranging from deadly to docile.

The military task force is picked off in various gruesome ways before Artemis is the last one standing, and must join forces with an experienced but abandoned hunter (Tony Jaa) if she has any hope of surviving this strange territory and returning to her world.

Paul W.S. Anderson is no stranger to genre fare, as is evident by catalog of high concept, mid-budget B-movies that are elevated by his mastery of cinematic language that has since been coined by those smarter than I as “vulgar auteurism”. His canon includes the Jason Statham actioner DEATH RACE, several of the RESIDENT EVIL films, the 2014 disaster-romance POMPEII, ALIEN VS PREDATOR, THE THREE MUSKETEERS, EVENT HORIZON, and of course his crown jewel, the original MORTAL KOMBAT.

It is in MONSTER HUNTER, a film made for just under $60 million (pocket change in the world of blockbusters) that his strengths are allowed to shine. 2012’s RESIDENT EVIL RETRIBUTION was his masterclass in big budget tight rope walking, balancing his expressive and gaudy vision of grind house violence and surprisingly heartfelt humanity through the lens of a film that is so neatly and intricately directed that any frame could be taken for a painting. This film is Anderson at his most primal.

For the film’s 1 hr 30 min runtime, hardly any dialogue is spoke past the initial camaraderie of the red shirt military expedition. Milla Jovovich’s Artemis and Tony Jaa’s unnamed Hunter do not share a language, and their interactions are mostly done through signs and broken attempts at English. George Miller did something similar with 2016’s MAD MAX: FURY ROAD, which I firmly believe Anderson did better here.

It starts as a rousing moment as Artemis slaps the hood of their Humvee in tune and her soldiers begin singing it- it is a moment used to lift the spirits of her startled team. This is brutally juxtaposed when Artemis is standing in the dark of the sunset, waiting to lure out a creature, and begins to sing it to herself. No men back her up. No one is there to help. She is alone, worn down, beaten, bruised, and traumatized.

Milla Jovovich’s voice cracks ever so slightly, and her eyes shift around in fright and determination. It is is a true testament to her ability as an actress, and her husband Paul W.S. Anderson’s grasp on emotion that few give him proper credit for.

It is Anderson’s complete understanding of how genres work that by the time the bleak, horrific opening segues into a comical take on The Odd Couple between Artemis and The Hunter as they train to battle a desert-born creature called Diablos, and then into a wacky, heavily costumed, fantasy action film that seems like cosplay come to life, you don’t even know that it happened. It is all so unnaturally natural.

Monsters get hunted, and people get eaten, and not once do you ever feel that the film is treading water. It moves at a brisk pace, and even without being a fan of or even passingly aware of the videogames, you get a real sense that the costumes, props, and environments have been recreated or adapted stunningly. This is a true “fantasy” setting, and everything you see on screen seems to tell a story about the world without any dialogue to back it up.

The film does end on a cliffhanger though, following a completely bonkers battle scene that alone is worth the price of admission. So be ready for that.

MONSTER HUNTER is Paul W.S. Anderson at a level he hasn’t been on since, I would say, DEATH RACE. Big things come in small packages, and this film is experimental as much as it is traditional. Death-defying action, sick creature design, and some nail-biting tension come together in a blend only Anderson could concoct.