VFW; Methodist Church give bikes to over 120 children 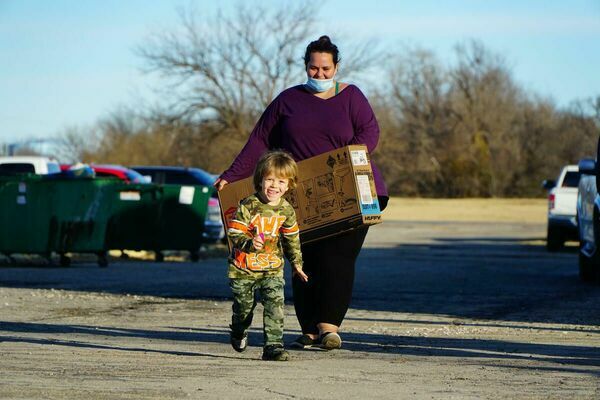 Dressed head-to-toe in camouflage, four-year-old Luke Garriott smiled from ear-to-ear as he ran across the parking lot of the Blackwell Veterans of Foreign Wars building.

With his arms flailing in the air and his eyes wide open, he bolted toward a crowd of children laughing and jumping in the Sunday afternoon sunlight. His mother, Samantha Garriott, tried to keep up with him as she carried a large, brown box.

That day, he got what he wanted. So did 124 other children.

At 3 p.m., dozens of Blackwell families gathered in the VFW parking lot, where blue, pink, red and purple bicycles for children of all ages were lined up for inspection. Each child who attended the event was given a numbered ticket to place in a drawing for the bicycle of his or her choice.

“We have 125 bikes to give you guys today, and I want to say, Blackwell as a community loves you guys,” Jourdyn Mooring, the First United Methodist Church’s youth director, told children at the beginning of the event. “We raised over $7,000 for bikes. That is amazing.”

“The very first year was a fluke,” he said. “We didn’t mean for this to happen. It just kind of developed into it. I think we gave about seven out.”

That number has grown each year since then. In 2019, the church gave away 100 bikes.

Event organizers planned to give away even more bikes in 2020. When the coronavirus pandemic began, however, their hopes of having a bigger giveaway were dashed. In November, the group only had enough money for 74 bikes. But then, a member of the VFW came forward and pledged to donate up to $2,000 so the group could buy 90 bikes.

And the donations kept coming, just in time for the Sunday giveaway.

Children and their parents walked up and down the row of shiny bicycles, carefully examining each one before making their selections.

With her golden blonde hair flowing in the wind, one girl ran toward a bicycle and grabbed onto some of the silver tassels dangling from one of the handlebars. Across the parking lot, a boy dressed in a black shirt blazoned with a photo of the Grave Digger monster truck pointed toward a dark blue bike.

Some children took longer than others to pick a bike, strolling up and down the bike line several times. Some had a little parental assistance.

With his father’s help, three-year-old Cullen Bonomini dropped his ticket in a bag hanging from the front of a black and red bicycle. His eyes were locked on the small pink ticket as it floated into the bag.

“He’s going to love it,” Bonomini’s mother, Valri Cope, said. “He’s got two of them that he ran pretty much down to the dirt. He’ll be pretty excited. It’s really, really nice. We weren’t going to be able to get anything for him this year. … It’s just really hard.”

That’s a sentiment McIlnay was aware of when he started the bike giveaway.

Children of all ages waited for their ticket numbers to be called once the drawing began. When a child’s ticket number was called, parents would step to the back of the VFW building, where the bikes their children won were waiting for them.

Stormy Durbin walked toward the stack of boxed-up bicycles, and she didn’t let her crutches stop her.

Durbin, 13, has caudal regression syndrome, a disease that impairs the growth of the lower half of a person’s body.

“She’s got one lumbar in her spine, no pelvic bones, no sacrum bones and no hip joints,” her mother, Amber Bennett, said.

“And no bones in my feet,” Durbin added.

Durbin was diagnosed with the disease at birth. At 10 inches long, she weighed one pound and four ounces.

Doctors didn’t expect her to live a week, her mother said. Then they said she’d likely never be able to walk, let alone ride a bicycle.

In the last few months, however, she’s caught on.

“I hold the back of it for her, generally,” Bennett said. “Once she gets going, she can do it. But I stay pretty close.”

Durbin said she was going to take her new bike for a ride as soon as she could.

“This is pretty amazing,” Bennett said. “Especially with all the COVID stuff going on, this is amazing. And for her to be able to have one, just being able to learn how to ride a bike when they said she’d never even stand up, it’s a miracle. It’s a miracle.”