WONDER WOMAN 1984 is an emotional morality lesson with magnetic performances 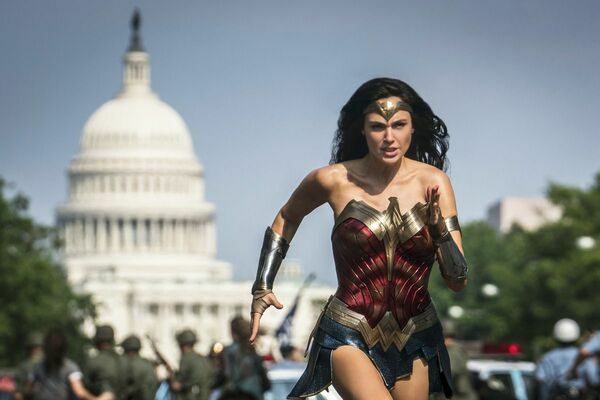 Christmas weekend saw the dual release of the DC Comics adaptation WONDER WOMAN 1984 in theaters and on HBO Max, and while the film has proven to be divisive among some, there is no mistaking that it is a more thoughtful, poignant, and in some ways more mature exploration of Wonder Woman than her debut outing in 2017.

When we last saw Diana (Gal Gadot), the Amazonian warrior had intervened in World War I to stop a power-hungry Ares who was pulling strings of the Great War behind the scenes. In the conflict, she lost the love of her life, an American pilot named Steve Trevor (Chris Pine).

Flashing forward to the big hair, synth music, and shoulder pads of the 1980s we find Diana is working for the Smithsonian Museum and occasionally stopping petty crime as Wonder Woman (this, we see, in a cute and fun opening montage). When some thieves hold up a black market vendor fronting as a mall-store jewelry shop, Wonder Woman intervenes, and the ancient stolen possessions of this black market are taken to the Smithsonian where Diana and her dorky co-worker Dr. Barbara Minerva (Kristen Wiig) investigate one item in particular...a mysterious stone said to grant the wishes of anyone in possession of it. This wish stone, of course, is sought after by a slimy get-rich-quick TV personality and hopeful oil tycoon by the name of Maxwell Lord (Pedro Pascal)

What does Diana want more than anything? For Steve to come back. What does Max Lord want? Unlimited power. “More”. What does Barbara want? To be funny, sexy, and cool like Diana. Everyone gets their wishes, but as we quickly learn, every wish has a cost. To get something, something must be taken. But when does it end? And what will we pay for our dreams to come true?

Director Patty Jenkins took the liberty of following WONDER WOMAN up with something bold and startling in WONDER WOMAN 1984 (WW84) which is less a “comic book action movie” than it is an extended 2-hour version of a morality-driven episode of, say, “The Twilight Zone” or the original 70's “Wonder Woman” show. There's the CGI action scenes of course, that feel added by necessity rather than desire, but you can tell Patty Jenkins (who wrote the film as well) had her eyes very firmly set on the characters rather than the “comics”.

WW84 doesn't end with a gigantic awe-inspiring CGI battle that takes us on a whirlwind, breakneck, bash-em-up. It ends with essentially two people in a room, talking. That's the final battle. Wonder Woman doesn't unlock her gift of flight or her mastery of the invisible jet by taking on waves of henchmen- she unlocks them by listening to her heart, and by listening to those around her. Wonder Woman's powers are extensions of her character.

The film is carried, impressively, by the core roster of actors. Gal Gadot feels more natural here than ever as Diana, and it has been impressive seeing her come into the role from 2016's debut in BATMAN v SUPERMAN. Chris Pine, her love interest, continues to exude charm, charisma, and a sort of nuanced maturity that comes through with his grey hair streaks and more hardened face. Pine isn't the baby-faced heart throb of STAR TREK (2009) days, but his age, like wine, has only made him better.

Pedro Pascal as chief antagonist Maxwell Lord can be a bastard, and should have been utterly irredeemable the more we see him fall apart. Driven by a manic, Nic Cage-esque performance by Chilean actor Pascal, Maxwell Lord harkens back to iconic villains like Joel Schumacher's interpretation of The Riddler (Jim Carrey). Lord, of course, actually becomes one of the film's most sympathetic characters, and actually gets one of the most redeeming villain arcs in recent memory.

Wiig, best known for her roles in comedies like BRIDESMAIDS, MACGRUBER, and ANCHORMAN 2, is a natural here in director Jenkins' take on baddie Cheetah. She obviously shares some (no doubt intentional) similarities with Tim Burton and Michelle Pfeiffer's Catwoman of the ditzy office girl turned smoldering sex icon, but it works in the character's favor and acts as a nice lesson to her.

WW84 is a beautiful film. It is, as mentioned, a two hour morality lesson. We see Wonder Woman struggle as a person, in anguish over her own choices, desperately trying to find a way to save the day, but to keep herself happy. She cries to Steve Trevor at one point, asking him why she doesn't get to have one thing (him), why she can't just have that one thing. Diana knows having him back is draining her powers, and to stop Max Lord she must let Steve go.

Steve looks at her, sympathy and compassion in his piercing blue eyes, and says she doesn't have a choice. It's a powerful, beautiful, moment that precedes an emotionally devastating breakup, but it shows so much more: no matter how godly our heroes are, everyone hurts. Everyone sacrifices. And maybe...just maybe...we should think about what we need before we wish for it. What is the cost of the “easy way out”?

WW84 is streaming now on HBO Max and playing in theaters.