Elks Lodge gives back to community 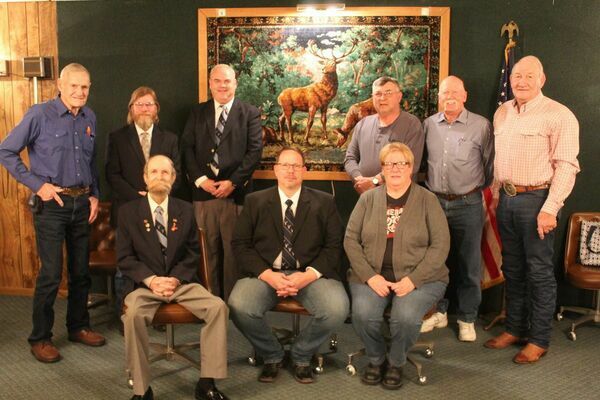 Blackwell's Elks Lodge No. 1347 has been a staple in the community since 1917, when it was on East Blackwell Avenue. The organization, now based out of its lodge on North 29th Street, is more than just the happening spot for Blackwell's annual Homecoming festivities.

Since 2018, the organization has put more than $14,000 toward community efforts.   “We're a fraternal organization that is dedicated to giving back to the community,” Trustee Randy Paige said ahead of the organization's final 2020 meeting, which took place last week. “It's a place for people, for friendship and for helping our fellow man.”   The Elks Lodge is one of the last remnants of a dying way of life in America's Hometown. In its prime, Blackwell had the American Legion, the Veterans of Foreign Wars, the Elk's Lodge, the Masonic Lodge and several more fraternal organizations. In recent years, that list has dwindled down to only two – the VFW and the Elks – but that hasn't stopped the organization's dedication, Paige said.

Secretary Debra North broke down the Elks Lodge's expenses over the last 20 years, with $500 going to Blackwell's Associated Charities; a combined $2,585 going toward sports organizations, including Blackwell's softball, baseball, basketball, bowling and football programs; more than $30,000 toward college scholarships and more than $2,000 going toward families in need during Christmas.

The Elks Lodge has donated approximately $3,000 toward Girl's State programs, and it has donated more than $800 toward Boy's State and local Boy Scouts programs, North said.  In 2018, the Elks donated $2,500 to Kara's Game for the construction of a handicap-accessible baseball field. In 2019, the organization's Beacon Grant provided $2,000 for the purchase of nearly 200 blankets and sleeping bags for Blackwell's Associated Charities.

Also in 2019, the Elks Lodge donated $2,000 to the Blackwell Youth Center to help purchase Google Chromebook laptops, a printer, whiteboards, snacks and school supplies for the youth center's after-school program.

The Elks Lodge also donated $3,500 toward the Beacon Grant for Blackwell Public Schools to purchase a touch-free water bottle refilling station.  “The Elks also sponsors Special Olympics programs,” Lewis Kuchar, the organization's exalted ruler, said. “We donate a wreath every Veterans Day, and we are responsible for properly disposing of old American flags.”  The Elks Lodge meets on the first Tuesday of every month, and any American citizen over the age of 21 may join by picking up an application.

“It is more than just an organization,” Leading Knight Tim Urban said. “It's a way to help our community.”  Those wishing to join may call the Lodge at 580-670-1303.