Reflections on a train: we're all just along for the ride 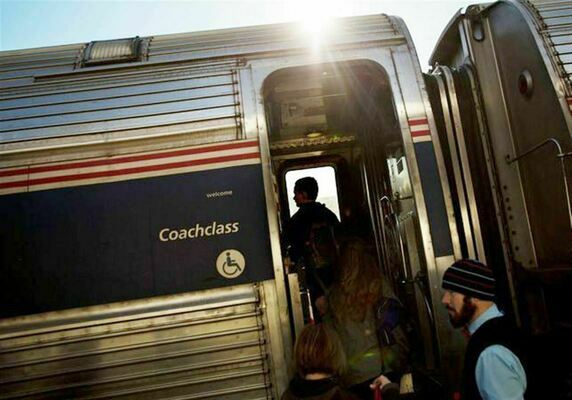 ONBOARD THE SOUTHWEST CHIEF – As I sat in my room in the sleeping car onboard Amtrak’s Southwest Chief train on Dec. 19, I looked out my window as the train pulled into a station.

The time was around 7:30 p.m. The train was stopping, and in a few minutes, it would be moving again. I was but one passenger onboard this massive machine rolling on into the night, joined by dozens of other people who were heading in the same direction.

Early in the morning of Dec. 20, I returned from a weeklong trip to Rensselaer, Indiana, to see one of my closest friends, Mathew Keeler. We’ve been the best of buds since our freshman year of high school, which seems like an eternity ago. Really, it’s more like yesterday.

I rode the train to go visit him. I left the Amtrak station in Newton, Kansas, early in the morning on Dec. 14.

Traveling by train isn’t necessarily the fastest mode of transportation. If I had flown up to see him, I’d have taken off from the Wichita airport and landed in Chicago a few hours later.

Instead, I took the scenic route. Sometimes, the trip drags on. And on. And on. I took a 12-hour train ride there and a 20-hour train ride back. (I caught an extra train leaving his town so that I could avoid going into Chicago in a car.) Until the train rolled into the station in Newton, I was just along for the ride.

It goes without saying that 2020 has been an awful year. I won’t elaborate any further on this because, as we’ve heard a million times or more, we’re all in this together.

We’re tired. We’re sick. We’re stressed out. We’re sad. We’ve been this way for close to a year. And despite our best attempts to stop the spread of the coronavirus, we may be this way for a while longer.

With the New Year upon us, what can we do to start off on the right foot? To take a step in the right direction, one away from 2020?

Some of you are probably familiar with James Taylor, one of the most famous musicians of all time. He’s got a song called “The Secret O’ Life.” It goes something like this:

“The secret of life is enjoying the passage of time/ Any fool can do it/ There ain’t nothin’ to it/ Nobody knows how he got to the top of the hill/ But since we’re on our way down/ We might as well enjoy the ride.”

That last line stuck with me as my sleeping car rocked back and forth, rolling down the tracks toward the next destination. We might as well enjoy the ride.

That’s not to say we should all look back on 2020 with joy. Heavens no. For many, if not most, this is impossible.

But we’re going to be here – in this world, pandemic and all – for a little while. Better buckle up and find a way to make the ride better.

This year, I’ve made a point to limit my time on social media. I’ve tried to visit my friends virtually or safely in-person. This has helped. We still need human connection.

I’ve tried to be patient with people, knowing that everyone is going through something different – something probably more painful than anything I’ve experienced.

I’ve tried to listen to people. We all need a shoulder to cry on, and sometimes, we just need to talk.

And I’ve tried to make new friends. Thanks to our technological advances, we can build lasting relationships with people we have only met once or twice in person. Who knew cell phones and computer cameras could facilitate such meaningful dialogue?

I’ve enjoyed doing some, but not all, of this. Sometimes, hearing people vent can be tiresome and burdening. But this is a part of life. Making new friends has been a blast, though. Maybe everything balances out.

In all of this, I’ve just been one person making his way through life – just one passenger on a train rolling down the tracks.

We won’t quickly overcome many of the challenges the pandemic poses. So, we’ve got to be safe, but we must also realize that there are some things we just can’t control in life. This is the harsh reality we must all face.

We’re all just along for the ride. Let’s do what we can – safely – to enjoy it.

Happy New Year, and may God bless you.