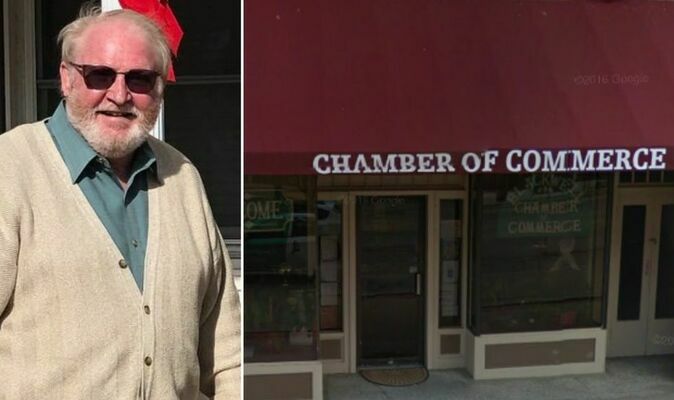 The Blackwell Area Chamber of Commerce has fired its executive director in an attempt to fix a shortfall in the organization’s budget.

Members of the Chamber’s board of directors voted in a Dec. 30 meeting to fire John Robertson, who became the Chamber’s executive director in the spring of 2013.

Robertson said Monday morning that he was notified of his termination after the Dec. 30 meeting by T.J. Greenfield, the Chamber’s executive president, and Lewis Kuchar, the Chamber’s past president.

“With the COVID, we couldn’t do any fundraisers, and our budget simply couldn’t handle two full-time employees,” Robertson said. “So, I got invited away.”

“They’re increasing the rent on one of their tenants, and with me being gone, yes, that will balance the budget,” he said.

Robertson said that, for now, he plans to maintain his industrial authority office in the Chamber building.

Robertson said he was not aware that the Chamber’s board had plans to cut ties with him. He said he didn’t learn of his termination until after the meeting.

“Nobody communicated anything with me, so who knows,” he said.

The Journal-Tribune cannot independently verify who made the decision to terminate Robertson – or which board members voted to fire him.

When asked to produce the documents, Courtney replied: “It’s no one else’s business.”

Courtney declined to discuss Robertson’s termination. She told The Journal-Tribune to speak with members of the Chamber’s executive board, which is comprised of: Greenfield, executive president; Kuchar, past president; Danen Everly, president-elect; and Emily Jantz, vice president.

Greenfield did not immediately return a call from The Journal-Tribune on Monday afternoon.

Robertson said he does not know who voted to fire him.

“I know they’ve had executive session,” he said. “Again, they know the answers to all that a hell of a lot more than I do.”

In an official statement made Monday night, members of the Chamber’s board of directors said they fired Robertson to reduce the Chamber’s expenses, but suggested that the Chamber may hire a new executive director in the future. No board members were named in the statement.

“After much consideration related to our current projected budget and the ongoing COVID-19 pandemic, a decision has been made to reduce one of our ongoing daily expenses,” the statement read. “That expense involves eliminating the position of Executive Director of the Blackwell Area Chamber of Commerce, for the time being. This decision was made unanimously by the Board of Directors present at the December 30, 2020 meeting.

“This option was not taken lightly, but rather a way to allow the Chamber to be self-sustainable for the foreseeable future and to continue our main purpose of providing services to our members.”

Cindy Oard, owner of the Wonderfully Made Studio on Main Street, has helped organized community events in recent years. In 2013, she brought some Blackwell residents together to paint downtown buildings. She said Robertson was helpful in those endeavors.

“I have a lot of wonderful things to say about John,” she said. “The whole time we were doing stuff downtown, when there’s a problem, I talk to John. That man has encouraged me so much in what I’ve been doing. I can’t say enough good things about John. … He’s a good man.”

“I’ve always liked him,” she said. “He was very helpful with tourism.”

Robertson said he was an “at-will” employee of the Chamber. He said he was employed without a contract.

“We’re going to have a visit with my BIA board, BEDA board, and we’ll just see how things shake out,” he said. “I’m getting awful close to retirement anyway, but we’ll just play it live at this point.”

Before he started working in Blackwell, Robertson worked as the economic development director in Okmulgee, a town in eastern Oklahoma. He also worked for the Oklahoma Department of Commerce.

“The majority of my efforts and time have gone into the industrial side, and we’ve been very, very fortunate on there,” he said. “We’ve got every facility we own rented in a multiple-year lease. A lot of jobs have been created. We’ve built two new facilities since I’ve been here to the tune of about a little over $4 million. Things are moving well on the industrial side of things.”

He said he wishes the best for the Chamber and local businesses.

“Bottom line, good luck, I hope they succeed and grow and prosper,” he said. “That’s the name of the game for the community.”