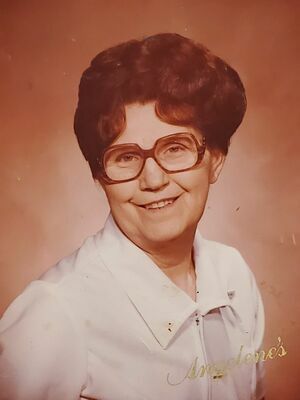 Helen Jean Shouse went to be with her Lord at her home on December 29, 2020 at the age of 101. She was born on July 11, 1919 to Charles and Ida Clinton in Littleport, Iowa. She was the 7th born of 13. At an early age her family moved to Ponca City, Ok to the 101 Ranch nearby. From there they moved to the Big V Ranch. Where her father was a ranch hand. She attended school at Sunnyside and Roosevelt in Ponca City. At a local barn dance, she fell in love with the love of her life, Orville William Shouse. They were married on June 8, 1939. Their marriage lasted 60 years until the death of her husband. Out of this marriage came 5 children, Barbra Jean, Charlotte Virginia, William (Bill) Coye, Tommy Ray, and Orville Lee.

In her early years, she went through the Great depression, the Oklahoma Dust Bowl, WWII and many other wars as well. She also saw the coming of the auto industry, radio, television, washing machines, man’s first steps on the moon, microwaves, and the modern telephones. She also saw the last two states receive state hood, Alaska and Hawaii.

Helen worked as a Certified Medical Aide at Blackwell Nursing Home for a while, then went back to being a home maker upon retiring. She had several hobbies like, fishing, traveling, cards, and Bingo. She loved to cook and bake. She baked cakes and pies gave them away. She loved family get togethers and holiday meals. Her dressing for Thanksgiving and Christmas was the big hit.

Helen had many grand kids, great grand kids and even some great-great grand kids. She loved them all unconditionally. She is survived by one brother, Don Clinton of Ponca City, one sister, Dorthey Ledilman of Rodgers, Arkansas and one daughter, Charlotte Zachary of Blackwell. She was proceeded in death by her parents, Charles and Ida, siblings Eunice, Melvin, Walter, Charles, Russel, Earl, Irene, Rialto, Evelyn, and Harvey. She was also proceeded in death by her husband, Orville, daughter, Barbra, and sons, Bill, Tommy, and Orville Lee.

Services will be at 2:00 p.m. on Monday, January 4, 2021 at Roberts and Son Funeral Home. Burial will follow in Blackwell Cemetery. Masks are required.

Visitation will take place one hour prior to the service.

In lieu of flowers, donations can be made to St. Jude Children’s Hospital, sent in c/o Roberts and Son Funeral Home, 120 W. Padon, Blackwell, Oklahoma 74631.
On-line condolences may be made at www.robertsandsonfh.com.