Netflix's COBRA KAI is hilarious, badass, and worth the watch 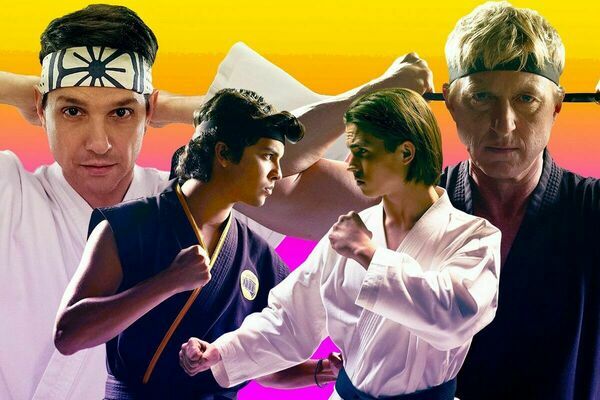 Over the weekend I had the distinct pleasure of attending the beautiful wedding ceremony of two of my best friends, who were joined in holy matrimony in Stillwater, Oklahoma.

But more importantly, I started the Netflix series “Cobra Kai” after seeing a thousand Facebook ads a day, as well as people talking about it on social media. So, having only seen THE KARATE KID once, back in 2015, I decided to dive into this series, unprepared and unaware of what to expect.

COBRA KAI, which began as a YouTube Original Series before that was dismissed and sold off to other services such as Netflix, is entering it's third season next week and seems to have exploded in popularity.

The series is set 30 years after the original 1984 KARATE KID, and finds ex-Cobra Johnny Lawrence (William Zabka) in a downward spiral- he's a depressed drunk still stuck in the 1980s, still reliving the painful defeat at the hands of Daniel LaRusso (Ralph Macchio) at the end of the first film's tournament.

Johnny is reluctantly and accidentally drawn into a street brawl where local punks are harassing his Ecuadorian immigrant neighbor, a fresh faced and innocent teenager Miguel Diaz (Xolo Maridueña). This event acts as an awakening for the down and out Johnny, who begins to train the perpetually bullied Miguel in karate, and reopens the Cobra Kai dojo, determined to be a better sensei- and person- than the villainous John Kreese was to him.

Of course, fate puts him back into contact with mortal enemy Daniel LaRusso who is a wildly successful car dealership franchise owner. The two find themselves, 30 years later, still at war as fate throws curveball after curveball and their lives become intwined in ways they never could have seen coming.

COBRA KAI is a deliciously well-made show that is genuinely hilarious, perpetually exciting, and surprisingly thoughtful. It embraces nostalgia in small doses, but it lets us relish in the new characters and their teenage dramas just as much as we get to dive into what makes Daniel and Johnny tick. The story being told through the eyes of Johnny is refreshing, and serves as a way to retroactively humanize this character who was nothing more than a bleach blonde 1980's movie bully.

Johnny, now, is still obsessed with “picking up babes” and “not being lame” and his forever young mentality is one of the best parts of the show. I'm not kidding when I say I've laughed harder at the writing and wittiness of COBRA KAI than I have any TV series since HBO's VEEP.

It's fun to root for the bad guys, and COBRA KAI lets you do that guilt-free as you see these bullied kids learn to embrace their differences and stand up for themselves thanks to Johnny's teachings at the Cobra Kai dojo. You see the “other side” of the classic 80's badguys, and you even get to see the “other side” of the seemingly infallible Daniel LaRusso. Maybe he wasn't the “hero” after all, right?

The two seasons out now are a breezy watch with ten 30-minute episodes a piece that fly by like nothing. The writing is perfectly balances between the teen dramedy, the adult lessons, the action...there's something in COBRA KAI for everyone.

I cannot recommend this series enough, and if a series can hold my attention long enough to binge it, that is rare indeed. For the record, I accidentally watched the entire first season in one sitting before I realized what had happened. It's that addicting.

So check out COBRA KAI on Netflix ahead of the third season premiere this Friday!