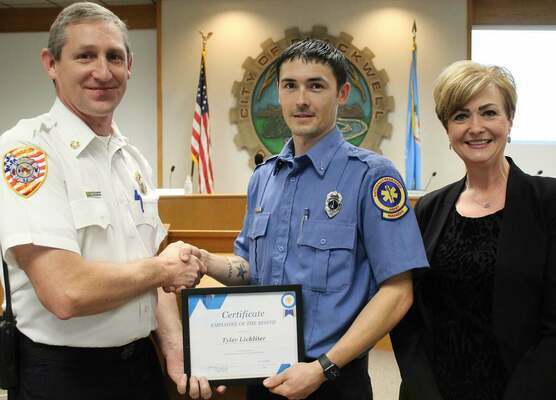 The Blackwell City Council met Thursday night for the first meeting of 2021, where three city employees were recognized by City Manager Janet Smith as the city’s Employees of the Month and members of Blackwell Tourism spoke out against the City of Blackwell’s proposed funding agreement with the organization.

After the employee awards, Blackwell Tourism members Lynne Field and Mitzi Neuman addressed the Council during the public comment portion of the meeting. In her opening statement, Field said the proposed agreement would let Smith “dictate” the Tourism Board’s members and said the new terms weren’t “conducive” to the board’s operations.

“This new agreement is a little too detailed for us,” Neuman said. “We have full-time jobs and other obligations. ... We don’t feel that we should be told when exactly to do everything.”

Neuman said the tourism board has done more in the past five years to promote Blackwell than has been done in the last 20, saying that the board’s volunteers are dedicated to the promotion of the city.

“We feel like we shouldn’t be told when to do it and how to do it,” Neuman said.

Next, the Council discussed items for payment. Councilman Jon Webb raised concerns about $2,600 being spent on office chairs in City Hall. Smith addressed his concerns, saying that old chairs were being replaced with new ones throughout the building.

“I know you can spend money,” Webb said to Smith. “I’m just curious why we are.”

“It has been a long time since many of these were replaced, and this is a normal expense that any business has, which is replacing chairs,” Smith said.

The Council then heard reports from city department officials.

After hearing from officials, the Council then approved a moratorium - a temporary pause - on the city’s ambulance subscription service so that the City Council can look through “all possibilities” and implementations of the subscription service, according to Mayor Steve Marquardt.

The next item was the funding agreement with the tourism board.

Smith prefaced the discussion by saying the 10-member board wouldn’t change. Board members would instead serve a yearly term, elected by the Council, instead of every two years to avoid any potential discrimination accusations.

Smith said the tourism board’s funding is thoroughly audited because it comes directly from the city’s sales tax collections. The board receives $3,500 per month — a total of $42,000 per year — and the board may only use it for certain purposes.

This, Smith said, makes the tourism board more like a city entity because of both accountability and funding. Smith said that, because of the aforementioned points, it makes sense that the board would be under scrutiny and oversight for various legal and financial reasons. She said that, by enacting the agreement, she wishes to protect the board and the City of Blackwell from any potential legal issues.

Field and Neuman spoke to the Council again, saying that the board consists of volunteers. They said the scope of service requested by the agreement from the city was too specific and precise.

They discussed points such as designing t-shirts and handing out snow-cone tickets during the 4th of July as some of the more strenuous and rigid requirements in the agreement.

Field said the more creative members of the board would ultimately be hindered by the new agreement’s workload.

Marquardt then asked for a specific example of that. Field said the tourism board couldn’t have done work on the barn quilt and geocache trails under the guidelines set forth by the new proposed agreement.

Smith said there is a negotiation point in the contract, and that the agreement is to be used as measure to see the work the

tourism board is doing. S

he said that, because the tourism board is given $42,000 per year, the city is obligated to show exactly where that money is going.

Webb said the tourism board doesn’t want “Janet — the city — to dictate what [the tourism board] should be doing, how they should do it, and the reports they would have to make.”

Smith said this isn’t an attempt to “gain control” of the tourism board. She said the the City of Blackwell can’t fund such an entity without some sort of legal agreement in place.

After more discussion, Webb said it was unfair that the tourism board was being threatened with the removal of barn quilts from city property. When asked where this “threat” was detailed, Webb said it wasn’t in the agreement, and said it was, perhaps, in his imagination.

After almost an hour of discussion, the item was tabled, allowing City Attorney Bryce Kennedy to rewrite and reexamine the agreement.

The Council approved the purchase of a compact track loader as well as material for the Streets & Parks Department, digital radios for city departments and new ventilators for ambulances in the city fire department.