Blackwell to host 3A wrestling regionals in February 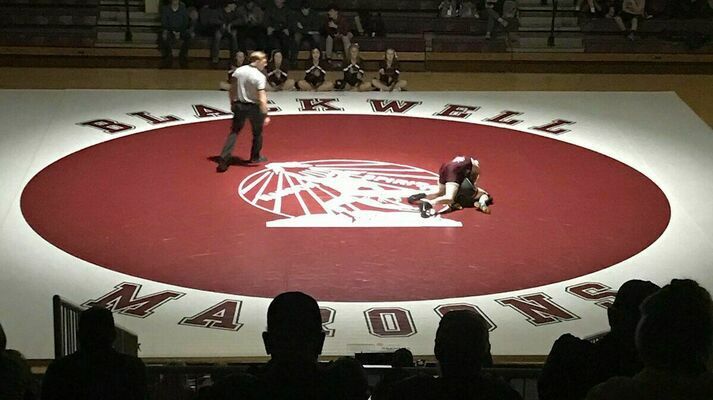 The Blackwell wrestling program had a great week on the mat and off the mat last week. Besides posting dual meet wins over Newkirk and Guthrie, the Maroons were named a Class 3A regional host for this year to be held on Feb. 12-13 in Blackwell.

The Oklahoma Secondary School Activities Association (OSSAA) made the announcement on January 15. The other Class 3A regional is in Plainview. Because of COVID, the wrestling calendar has changed significantly. The weekend of the regionals is normally Dual State weekend.

That event is now scheduled for March 12-13 in Enid. The state meet is now February 25-26-27 at the state fair arena. The regional will also have a different format with the lower seven weight classes (106-145 pounds) being contested from start to finish on Friday and the remaining weights (152-285 pounds) being contested on Saturday. The OS-SAA has gotten a special waiver from the National High School Federation to allow an individual to wrestle up to six matches in a day for the regional.

There are plans in place if a wrestler would need more than six matches to qualify but OSSA is waiting for the entries which in Class 3A could be an issue in the lower weights. Blackwell Public Schools Superintendent Shawn Haskins told The Journal-Tribune on Monday that school officials will work with the Oklahoma Secondary Schools Activities Association to keep students safe during the organization’s regional wrestling tournament, which takes place in the high school gym Feb. 12 and 13.

“It won’t be an ordinary regional,” Haskins said. “There’s going to be a lot of safety precautions.” Haskins said officials have discussed placing limits on the number of spectators allowed in the gym during the event. “We’ve talked about just allowing two tickets per wrestler,” Haskins said. “Once that wrestler’s done, they have to leave. The OSSAA is still kind of trying to get some guidance out for us.” Haskins said wrestling events will be divided evenly between the two days of the event. “They’re only going to do half the weights each day,” he said. “Usually, they’ll do everything in two days. But what they want to get the traffic down is have half the weights wrestle one day – get them in and get them out – and then have the other half wrestle the next day.” Haskins said the OSSAA hasn’t yet finalized its official safety rules for the event. He said those rules may be final-ized the week before the tournament.

“This is just discussion,” he said. “It’s not set in stone. … We’re still four weeks away.” Haskins said school officials will keep students and spectators safe. “I promise you,” Haskins said, “We’re not going to have some super-spreader over there with 500 or 600 people over there on either side of the gym. It’s not going to work. The bottom line is, we have to wait and see what direction the OSSAA gives us. And they may just say, ‘Do however you want to do it, and we’ll back you.’ We just don’t know.” The state tournament two weeks later is also taking a different format this year.

The dual state meet will also be a one day affair with the Class 4A teams and 5A teams on Friday with a morning session and an evening session. Class 3A gets the night session on Saturday with Class 6A going Saturday morning. In the past the quarterfinals were always the first day and the semi-finals and finals were the second day. This year the finalists will have to wrestle three times in one day.

All of theses changes were made as COVID precautions so that if an individual or team has issues after any event, they still have time to quarantine and compete in the next event. Blackwell-64 Newkirk-6 The dual was over with by 132 pounds as the Maroons were ahead 27-0 before losing their lone match of the night at 138 pounds. Newkirk would forfeit 145,170,172 and 285 pound weight classes to make the Maroons lead even bigger.

Evin Simpson (51-seconds), Caleb O’Dell (1:09) and Logan Webb (4:33) would get falls in the match and Tanner Botts would pick up a 17-4 major decision to lead the way. Kasen O’Dell and Colby Looper would win tight 2-0 and 2-1 decisions for the Maroons. Blackwell-45 Guthrie-22 On January 14, the Maroons celebrated coronation in a big way taking down Class 5A Guthrie, 45-22. The Maroons again jumped out to an early lead in the lower weights as Kasen O’Dell started the match with a fall in 1:35 for an early 6-0 lead. Aiden O’Dell (113 pounds) went the distance with state runner-up Eli Kirk for a1-0 decision and a 9-0 team lead.

The Maroons forfeited 195 pounds and Guthrie got a fall at 220 pounds to finish their scoring for the night at 22 points. JD McCleary got the final points of the night on a last second takedown to win 7-6. McCleary hung in there for the whole match as the Guthrie wrestler, Riley Boyster got tagged with five penalty points during the match for illegal holds and for slapping at McCleary to start the match.

The Maroons are scheduled to wrestle Enid tomorrow night in Blackwell and then travel to Owasso for the Ram Duals this weekend, which will be a strong challenge for the Maroons as they get ready for the district dual meet next week in Morrison.