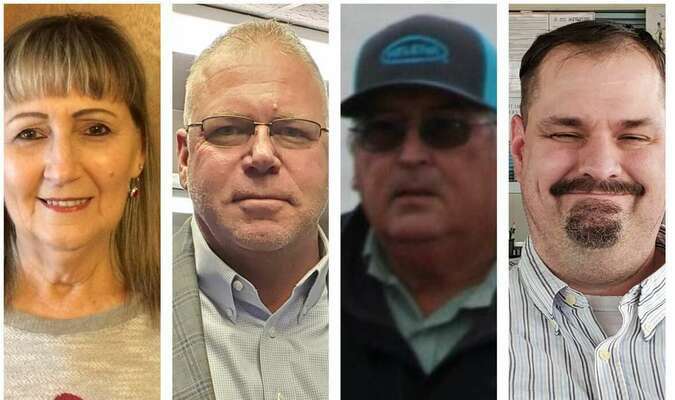 The Blackwell Area Chamber of Commerce will host a Ward No. 3 City Council candidates forum Feb. 2 in the Chamber’s conference room at 120 S. Main St.

Seating will be limited because of COVID-19 measures, but the Chamber will be broadcasting the forum on Facebook Live on its page, “Blackwell Area Chamber of Commerce.”

The Chamber of Commerce confirmed that the format will be similar to their mayoral forums in the past, where candidates will be given time for an opening statement before rotating to answer the questions. Then, they will be allowed to make a closing statement.

Questions will be given by the Chamber, and will also be received from audience members.

The primary election for the Blackwell City Council will be Feb. 9. Robert E. Husted, Josh Gillman, Phillip Logan and Diane Spry are running for the office.

Husted said he has always wanted to have a more involved part in his community, and now he says he finally has the time.

A Blackwell resident his whole life, Husted served for more than 30 years in the Army Reserves. A military man, Husted said he believes it is his military experience that will best suit him for service on the Council.

“I’ve never had the time to run for Council,” Husted said. “I’ve started my own business, and things are finally calmed down for me. I owe a lot to my wife, Stacey, who serves on the board of education. She’s really been there for me, and encouraged me to finally do this.” Husted said he believes Blackwell needs a “solid plan,” something he said he is more than experienced with.

“Planning, strategy, all of that comes naturally to me from the Army Reserves,” he said. “I believe Blackwell needs a solid 5- to 10-year plan, because without some sense of direction, you just end up floating along. I love Blackwell, and Blackwell is the kind of community that you get what you give. So, if you put a lot into Blackwell, it will give that back in kind.”

Husted said he is excited for the political adventure, and to see Blackwell flourish.

Gillman said he is equal parts nervous and excited for his political endeavor. An admirer of local politics since childhood, Gillman said he loves Blackwell and hopes he can benefit his community. Gillman has lived in Oklahoma since 2002 and Blackwell since 2017.

His wife, Carolyn Watson, grew up in Blackwell, graduating with the Class of 1987. From her, Gillman said he has “learned a great deal about this wonderful city. I have come to love and care for the people in this great city. Our son, Joe, attends Blackwell Middle School, where he participates in vocal and the academic team.”

“I think I could bring a lot of fresh ideas to the Council and the community as a whole. By serving on the City Council, we’re all a part of something bigger, and it’s when I moved here I really felt that Blackwell had so much to offer.”

Gillman said he is also an advocate of libraries, having spent his childhood in them, always seeking to quench his thirst for knowledge.

“I’d love to involve the library a lot more in our community,” he said.

“There’s such an untapped potential there, and I think that would be incredible for Blackwell. I’m an advocate for adult literacy, and I think that could go a long way into getting the community as a whole more educated and involved in everything from community events to politics.

“I am for a better Blackwell. In order to make Blackwell better, I intend to continue to fight for honesty, integrity, responsibility, accountability and transparency within our city government. I will also strive to be an excellent steward with your taxes and bring about positive change to our community as needed.”

Logan, born and raised in Blackwell, said he has made his platform on the promise to “keep Blackwell alive and out of the hands of the corrupt.”

“I think Blackwell needs to either improve or it will die, and that’s the harsh reality of it,” Logan said. “Walmart and United can’t keep a town alive. We need shops. We need business. We need more positivity. We need a community that wants to lift Blackwell up, not keep beating it down.”

Logan said he seeks to help improve streets, water lines, electrical lines and industry. He said he also desires to bring housing developments into town, and he wants to take advantage of Blackwell’s unique location.

“Blackwell is located right off I-35 on a major U.S. highway that stretches across the nation,” he said. “Business should be booming here. The community should be welcoming that. But do you think a business wants to come to a town where the people are always on Facebook, bashing and complaining about everything in a city? No. Absolutely not. People see that. Businesses see that.”

Logan, a delivery driver for Helena Chemical, said he was encouraged to run by his friends and family. He said that, with him, “what you see is what you get.”

“My wife asked me if I was concerned about people bad-mouthing me and all of the woes that come with campaigning,” he said.

“I told her the negativity is like water on a duck’s back. It just rolls off. People are going to love you or hate you in anything. You can’t make everyone happy.”

Spry is a name locals may know from her former shop, “Diane’s Sport Spot,” which she ran for 25 years on Main Street. She said it factors heavily into her desire to bring more business to Blackwell.

“Some people asked me if I ever considered politics, and I never really had, but I think I owe it to the good people who supported me and my business,” she said. “I owe it to them to give back to my community.

“Blackwell is my hometown. Everybody knows everybody. It is a community that is all about giving back and coming together. I see so often fundraisers on Facebook or in the community. This is truly a town of generous, giving hearts, and I want to represent that, and to be a part of it. I think the Council needs to come together. There has been so much division in the past, and I believe that now we’re starting to heal, and we can continue to heal. We’re all here for the same thing – to see Blackwell prosper.”

Spry said she is also influenced by Councilwoman and mayoral-hopeful Julie Green as well as her predecessors, such as Nita Carroll and Piccola Hudsonpillar, who served on the Council.

“They were so strong and did so much for us,” she said. “I think it is time for more women to be involved in Blackwell. I love to see Julie up there. I love to see that. I believe we need to all be heard equally.”

Spry said she believes in Blackwell’s future and is a firm believer that a united and hopeful Blackwell is one that will build and succeed in the years to come.