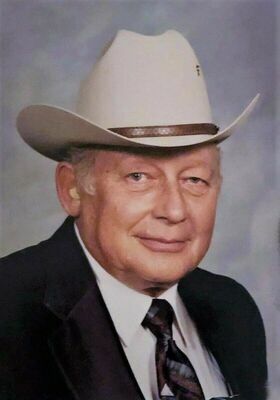 Ernie Roy Fredrick was born on November 16, 1936 in the kitchen on the family farm northeast of Medford to Charles Edward Fredrick and Zelma Edith (Wooderson) Fredrick and passed from this life on January 18, 2021 at his home in rural Medford with his family present.

Ernie was raised on the homestead staked out in the Land Run of 1893 by his grandfather, Ernest Robert Fredrick, seven miles east and two north of Medford. His parents took over the home and then passed the home onto Ernie and his growing family in 1957, where he and his wife, Marilyn, raised six children. The home is listed in the Oklahoma Centennial Farm and Ranch Program established by the Oklahoma Historical Society and the Oklahoma Department of Agriculture to recognize those families who have continuously occupied their land and carried out farming or ranching operations for at least 100 years.

Ernie attended Deer Creek School, where he played football and baseball for the Deer Creek Broncos. He was class president of his junior class, graduating in 1954. He immediately enlisted in the U.S. Navy and served aboard the aircraft carrier USS Kearsarge-CVA 33 as a machinist’s mate, MML3.

Ernie married Marilyn Fauchier of Nardin on December 29, 1954 at the Church of Christ in Blackwell. To this union six children were born: Cary, Craig, Shari, twins, Debbie and Daron, and Brad.

Ernie was farmer and rancher after his service in the U.S. Navy and retired from farming in 2006.

Ernie was born, lived and died on the same farm.

Memorials may be given to Medford Ambulance Service or Deer Creek-Lamont FFA through the funeral home.