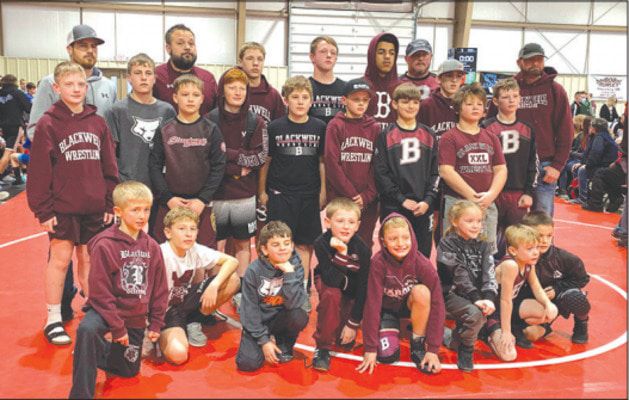 The Blackwell High School wrestling team went 4-2 last week in a series of dual meets over two days. The week started with a dual with Class 6A Enid on Jan. 21. As has been the trend all season the Maroons lower five weights were all victorious and gave the Maroons an early 30-0 lead.

The Maroons would give up three falls, a forfeit, and a decision to make the score 40-33 before JD McCleary would get a 4-1 win at 285 pounds and a 43-33 Maroons win. The Maroons then got into the Owasso Ram Duals on Jan. 22 in place of the cancelled Pawhuska Tournament. The Maroons would beat Claremore, 63- 12; defending Class 3A state champion Comanche 45-24; and the Owasso ‘B’ team 72-12.

In the meet against the Owasso “B” team the Maroons had to forfeit a match and lost one on a fall. They would pick up eight falls and four forfeits on the way to the win. In the dual against Claremore, the event was started at 138 pounds. The Maroons received a forfeit to start for an early 6-0 lead. Lara dropped a tough 7-1 decision to cut the lead in half. Botts would get a fall in 1:22 and the lead was back to six points at 9-3.

Gable Norman (160 pounds) dropped a 6-2 decision to make the score 9-6. Mora would get a tech fall and Kolby Looper (182 pounds) would get a major decision and the lead was 21-6. Claremore would get its last points of the day on a forfeit at 195 pounds to make the score 21-12. Logan Webb (220 pounds) would get a fall in 1:59 and the Maroons would then receive forfeits at 285,106, and 113 pounds, a fall from Caleb O’Dell, another forfeit at 126 pounds and finally a fall by Jaiden Freeman (132 pounds) to end the match at 63-12. In the dual against the defending state champion Comanche team, the meet started at 113 pounds and the Maroons jumped out to a 21-0 lead with three falls and a Kaiden Ailey decision at 132 pounds.

Botts and Mora got falls to make the score 33-12 going into 182 pounds. Comanche got two decisions and a forfeit to narrow the gap to 33-24. McCleary and Aiden O’Dell finished up with falls and the Maroons had a huge dual meet win over the defending state champions. The two losses in Owasso were to the No. 1 team in Kansas, Goddard High School (45-30) and to the No. 3 team in Class 3A right behind Blackwell Jay (39-29).

In the Goddard dual, Aiden O’Dell had a fall in 5:37 to start the meet and Simpson and Caleb O’Dell got decisions and the Maroons let 12-3. Goddard would get falls in six of the next seven weights to be out in front 39-18 before surrendering forfeits at 195 and 220 pounds to make the score 39-30. Goddard would get another fall to end the match at 45-30. The Jay dual started at 132 pounds and the Maroons got bonus point majority decisions from Ailey and Lawson Lusk for an early 8-0 lead.

Botts and Mora got falls and it was 20-9 going into the critical upper weights. Jay dominated the Maroons with two falls a decision and a forfeit to lead 30-20 as they meet went into the lower weights. Aiden O’Dell would get a decision to get the score to 30-23 with three weights to go.

Jay would get a decision and a fall to secure the match at 39-23 and Caleb O’Dell would close things out with a fall for the final score of 39-29. “I like the way we are wrestling and competing,” said Maroons Head Coach Connor Cline.

“We had several individual matches that could have gone either way throughout the day. Goddard and Jay were tough, and it was a good win to beat the defending Class 3A champion Comanche.”