Ward 3 candidates face off in forum ahead of election 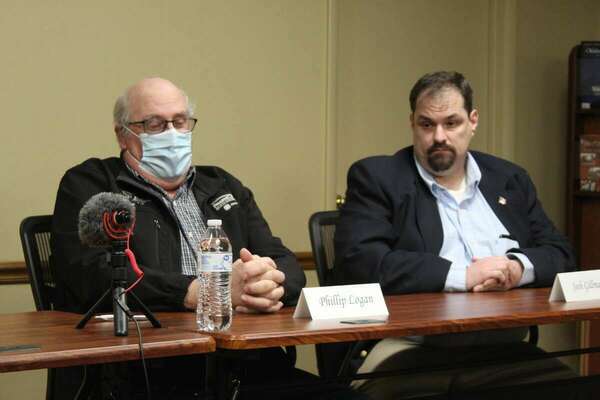 The forum began with introductions from the candidates. All three parties thanked T.J. Greenfield and the Chamber of Commerce for hosting the event.

In Husted’s opening statement, he said he and his family have always been in Blackwell, and it was his desire to see the town adopt a 5- to10-year plan for where Blackwell wants to be. He said he wants to put the citizens first. He said Blackwell was a clean and friendly community, and that his more than 30 years in the military had prepared him to properly serve his community.

Logan said Blackwell was a great town in a great location, and that he wanted to bring more business in. He urged Blackwell to look at itself and ask “where do we want to go from here?”

Gillman said he wants to build a better Blackwell, and seeks to improve streets, water and infrastructure.

The first question, asked by moderator Megan Holden, was what made the candidates qualified. Husted said he has spent time around leaders studying military budgeting and policy and has learned a lot from that. Logan said that he has worked all his life and knows how to work with people and industries to get things done. Gillman said he excels in leadership and people skills.

The next question was what the candidates’ top priorities for Blackwell were.

Another question was what the candidates thought about the city’s desire to turn the old Red Cross building at 13th Street and Ferguson Avenue into a secondary fire department. The question also asked how the city was paying for it.

Husted replied that the people need to see where the money is coming from, and that he wasn’t sure there was a need for another department location. “I don’t see the issue with the current [department],” he said.

The other two agreed that financial transparency was key.

A question from the audience asked for the candidates’ thoughts on the city manager’s ability to spend up to $5,000 without seeking Council approval, which can be used for various purchases such as equipment or resources. All three candidates agreed that the City of Blackwell needed tighter spending control.

Diane Spry withdrew from the race before the forum. To see results of Tuesday’s election, check out next week’s edition of The Journal-Tribune.