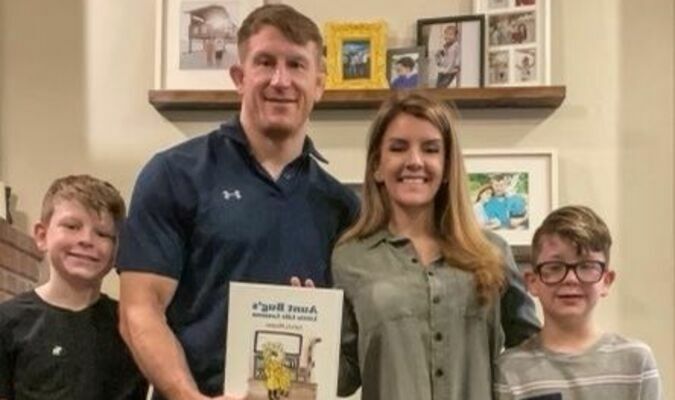 Jaden Siler was never a bug. But she was an aunt.

And she was called “Aunt Bug.”

When Siler was a little girl, her dad nicknamed her “Bug” out of love and in jest. The name stuck. Later, when her sister, Jemma Ryan, had two boys, Siler became “Aunt Bug.”

Siler adored her nephews. She spent time with them. Called them to check up on them. Bought them gifts from around the world. Played games with them. Hugged them tightly.

She loved them. They loved her.

She’s gone now. She died in 2018. But to Dasche and Maddan, Ryan’s children, Siler is still Aunt Bug. And to children across the world, Aunt Bug hopefully will become their favorite book character, her sister said.

Ryan, a Blackwell native, has finished her second children’s book inspired by the memory of her late sister. “Aunt Bug’s Little Life Lessons: Safety Mission” was published in early February by Mascot Books. It is available online and in book stores.

“Safety Mission” tells the story of Dasche, Ryan’s oldest son, as he sets out on an adventure with Aunt Bug. On their journey, the two pretend to be spies while Aunt Bug teaches Dasche about being aware of his surroundings. In the book, Dasche’s name was changed to “Dash” to make it easier for children to pronounce.

“That one is going to be teaching kids about situational awareness, being aware of what’s going on around them and why that’s important,” Ryan said.

Her first book, “Aunt Bug’s Little Life Lessons: Be Prepared, Not Scared!,” was published in February 2020. The book teaches children about the danger of being around strangers. In the book, Ryan has expanded the definition of what a “stranger” is so that children can be safer when interacting with people they don’t know.

“It teaches kids who strangers are,” Ryan said. “In today’s age, it’s anyone whom kids don’t know, including other children. You hear all the time about kids luring other kids away to be kidnapped and things like that. In this book, it goes over teaching kids exactly who strangers are and how to safely get to know new people.”

The storylines of the books are based on activities that Ryan and Siler did with Ryan’s children and nieces. When Ryan’s children were young, she and her sister would take them along while running errands, Ryan said. They would also take their brother’s daughters, Saige and Liv Siler.

When they went into stores and sat in waiting rooms of doctors’ offices, Ryan and Siler would ask the children to find the emergency exits in the building. They would also ask them to look at the people around them, memorizing the colors of the clothes they wore.

Ryan and Siler told the children these were games. In reality, they were teaching them how to be safe in public.

One day, a man overheard their conversation. He encouraged Ryan to write a children’s book about safety.

Initially, she disregarded the idea. A few years ago, while recovering from a shoulder surgery, she decided to pick up a pen and start writing.

“I had my sister Jaden help me go through and kind of make up what this one should be about, the characters, everything about it,” Ryan said.

“As we started nearing the end of it, she passed away.”

Jaden was born in 1996 to Jim and Nancy Siler of Blackwell. She loved traveling the world, and while she was a student at the University of Central Oklahoma in Edmond, she studied abroad in Spain.

Even when Jaden Siler was in college, she and her sister remained emotionally inseparable, Ryan said. And even when Siler was thousands of miles away, her nephews were always close to her heart.

“I remember she would send us a package from every country she visited with authentic little gifts in there, just for my boys,” Ryan said. “Never for me or my husband. It was always about her boys. And that’s what she called them – ‘her boys.’”

When Siler returned from Spain, she was engaged to Dakota Burns. First, she had to get her nephews’ approval to marry him. And they said she could.

Three months later, Siler died. Her family still misses her, especially Dasche and Madden. But even though Siler isn’t around to play with her nephews anymore, she’s still a source of strength for them, Ryan said.

Ryan’s son Dasche, 10, was recently diagnosed with type one diabetes, which Siler had.

Even though the diagnosis was scary, Dasche is “taking it like a champ,” Ryan said.

“He took to it like second nature,” she said. “It doesn’t bother him. He takes shots. He’s never cried about it. He’s extremely brave, and I think’s it’s growing up watching Jaden and my older brother have it, so he’s grown up seeing other people with it. He’s brave, for sure.”

About a year after Siler died, Ryan decided to finish the book. In memory of her sister, Ryan was inspired to rewrite parts of it.

“I wanted her legacy to live on, the things she kind of taught my kids and helped them through in life,” Ryan said. “So, to help carry on her legacy, I changed the characters to be all about her teaching my kids and my nieces all the little life lessons that me and her had talked about.

“She had always wanted to travel the world and do big things. So, I thought, ‘What better way than helping teach children all over the world little life lessons from Aunt Bug?’”

When Ryan finished her book, she had two options: publish and market the book herself or enlist the help of a publishing company.

She chose the latter.

“That part took me the longest,” she said. “After I wrote my first book, I had it all ready. The only thing I didn’t have was illustrations. I didn’t know where to start with that.”

Siler found an illustrator for her first book, drawing up enough pictures to complete the 38-page hardback. But for her second book, Ryan wanted a special touch. With the help of a new illustrator, she’s got it.

“I am so excited about the illustrations in this new one,” Ryan said. “They really pull out Bug’s crazy, wild hair and her spunky attitude. It just completely ties the book together, I feel like. … The picture of her in the book actually looks like her bedroom in one of the pictures online. My son’s bedroom, that’s what his room looks like.

“To a lot of other people, the illustrations just look fun and friendly and very inviting for kids to be drawn in. But for anybody who knows my sister, even my kids, it’s very personal. You’ll see touches of Jaden throughout the book, and my kids can look back at it years from now and hopefully have those fond memories of when they would hang out with their Aunt Bug.”

Both books are available on amazon.com, target.com and booksamillion.com. They’re also available for purchase at Barnes and Noble stores in the Oklahoma City Metro, where Ryan lives with her husband and children.

She said she remembers walking into one of the stores and seeing her book on the shelf.

“It was actually the coolest feeling I’ve ever felt, to walk in and see something that I accomplished,” she said. “I did it myself. I persevered, and there was all my hard work sitting there for everyone to see.”

MOVING ON WITH BUG

Reading the books is an emotional experience for Ryan’s children, she said. They can’t help but recall the fun times they had with Aunt Bug: eating ice cream, playing games and laughing together.

“It just kind of depends on what mood they’re in,” she said. “They’re always either extremely excited or it brings back sad memories and they wish she was here with them.”

When her sons get sad, Ryan tells them that, even though Aunt Bug isn’t alive, she’s still watching over them. She’s still with them.

“I’m really hoping that, as they grow up, they can look back, and they know it’s a children’s book, but maybe one day they can read it to their kids and talk to them about their fond memories of Aunt Bug,” Ryan said. “I hope it helps them remember the things she did teach them, and hopefully they can pass that on to their kids one day.”

She plans to publish more books in the future, she said.

“There’s a lot of kids out there that, their parents either don’t know how to talk to them about these situations, or a lot of kids whose parents aren’t really involved, so they don’t teach them these things,” she said. “For me, it’s really rewarding to know that, even if I help one kid, I’ve helped somebody.”

Her children have an explanation for it.

“It never fails, there’s a ladybug,” Ryan said. “It can be the dead of winter. I don’t even know where they come from. And we’ll be looking in the house, and there’s just a ladybug hanging out in the window. My kids swear up and down that’s her. She’s with them at all times.

“I hope growing up, when that magic fades, if that’s what it is, that these books will help those memories live on for them.”