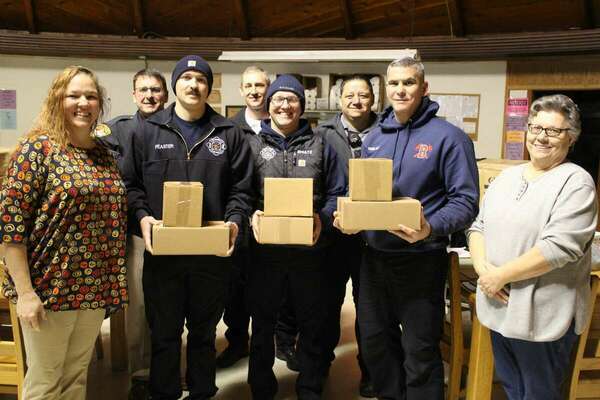 Blackwell police officers and firefighters on Feb. 11 assisted the Wheatheart Nutrition Project with delivering more than 130 boxes of food to senior citizens in Blackwell.

"I want to thank you all for helping to spread hope," Wheatheart Site Manager Dee Dillow said to the group during an emotional speech in the Wheatheart dining area on Blackwell Avenue.

Each box contains eight meals, meaning police officers and firefighters distributed more than 1,000 meals that morning. This initiative came from Wheatheart Nutrition Manager Kristi Ropp. “Kristi Ropp reached out to Blackwell P.D., Tonkawa, all over to try and get help delivering,” Dillow said. “With the weather being so awful – ice and snow – our drivers could barely get out in this. Thankfully, Kay County’s servicemen and women came through, and they were more than happy to assist us.” Ropp praised the police department for its work in the community. Wood said it was a service the police and fire departments were honored to provide.

Both agencies joined a county-wide effort alongside workers from Lamont, Newkirk and Tonkawa to distribute nearly 300 boxes. This helps ensure that local seniors in the Wheatheart Program are fed and prepared for the potentially brutal winter weather ahead that might otherwise prevent them from getting to their nutrition sites. Gage Wathor and Bailee Morgan from Newkirk, Sonny Clonts and City Manager Kirk Henderson from Tonkawa, and Grant County Commissioner Steve Stinson from Lamont also assisted in the food deliveries.