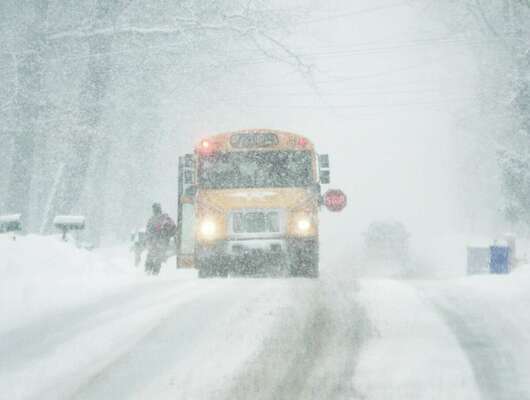 It’s Friday afternoon. I’m writing this column early because, like everyone else, I’m preparing for what we’re told will be the worst winter storm we’ve experienced in years.

Of course, this is Friday. And it’s Oklahoma. By the time this paper is in your mailbox, the situation could have changed entirely. Here’s to hoping for warmer weather, sooner.

In the meantime, I’m bracing for a snowpocalypse. I don’t think weatherman David Payne has used this descriptor yet, but he’s come close to it.

This situation seems unfathomable. Just two weekends ago, some of my friends and I were hanging out outside, and we were able to take our coats off for the first time in months. Spring seemed like it wasn’t too far away.

Then that groundhog screwed everything up. We’re hardly living in a winter wonderland, but we’re all wondering when winter will be over. Thanks, Pux.

I don’t think many of us were ready for the sudden drop in temperatures or the sheet of ice that covered the state. I know my rear end wasn’t ready for a sudden landing on the sidewalk on Monday.

But whether we were ready for the weather to change is irrelevant. Because we live in Oklahoma, where the rule is: Liking the weather here? Don’t worry. It’ll change.

One positive aspect of this winter storm is that talking about the weather with friends and loved ones is finally interesting. Not that I have any romantic prospects to test this tactic out on, but I bet this will be an acceptable discussion point for some time. I’ll keep telling myself this.

Before I sat down to pen this column, I called Wheeler Cobb, a close friend of mine who always has something ornery and insightful to say. We complained about the weather, of course, but I was intrigued to hear Wheeler say he was accustomed to it. And no, he doesn’t live in Minnesota.

Back in the ‘40s, ‘50s and ‘60s, Wheeler said, frigid temperatures and blizzards that dumped feet of snow across Oklahoma were common. He said the weather would stay that way for close to two weeks at a time. That’s about how long this storm is expected to last.

Back then, he said, folks got creative and found ways to enjoy the weather. Wheeler would find an old car hood and hook it behind a vehicle to tow his friends and children around farm fields. As someone who has also done this, I can say this is an incredibly fun way to sled.

I would recommend, however, that you pick a field free of cattle. When you’re lying down on a car hood with your face near the ground, nothing compares to the sensation of flying over a frozen cow patty. Or sledding face-first into a fresh one.

Not that I have any experience with either of those.

I suppose this kind of behavior, however, is why Wheeler and folks his age (even though I tell him and his wife they don’t act a day over 30) are called the Greatest Generation. They adapted to cold weather – mostly because they had to – and found ways to enjoy it.

On the plus side, I still have plenty to do. I can clean my dorm room. You know, one of the tasks I tell myself I’m going to do for days and weeks and continually put off.

I do this for good reason. The dirt on my floor and the dust on my shelves isn’t going anywhere. In my 20 years of life, I cannot recall a single instance in which either substance magically disappeared. So, when the weather is nice outside – like it was two weeks ago, the last time I threatened to clean my room – why would I want to stay inside and tidy up the place?

After all, I can always put all of that stuff off until the weather changes again. We do live in Oklahoma.