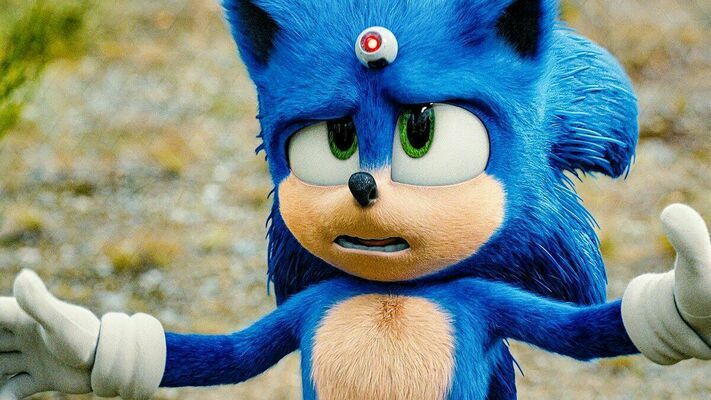 In honor of SONIC THE HEDGEHOG 2 being announced, and the first film’s one-year anniversary, here’s my February 2020 review of SONIC.

This past Valentine's Day weekend saw the release of SONIC THE HEDGEHOG from Paramount Pictures, starring “Parks and Recreation” star Ben Schwartz as the voice of the iconic Sega video-game mascot facing off against a plucked-from-the-90's Jim Carrey as the villainous Dr. Robotnik, who seeks to capture him...and the most shocking thing of all? SONIC is a knock-out.

SONIC THE HEDGEHOG follows the titular blue-blur, an anthropomorphic hedgehog with the ability to run at over 300 mph, who was sent to Earth from his home-world in a last ditch attempt to save his life. Now residing in the sleepy idyllic town of Green Hills, Montana, Sonic is a teenager and growing frustrated as he deals with his loneliness of having no friends or family. After accidentally unleashing a power surge of speed, the U.S. Government takes note and sends their “lab rat with teeth”, a drone tech expert by the name of Dr. Robotnik, to see what the problem is.

Robotnik, of course, wants to capture this mysterious rodent and experiment on his seemingly infinite power. Sonic escapes, and finds himself with Sheriff Tom Wachowski (James Marsden) who accidentally becomes a fugitive as the two travel cross-country to escape the maniacal doctor and find a way to get Sonic back to his home-world.

SONIC THE HEDGEHOG is directed by first-time filmmaker Jeff Fowler and is a thoroughly entertaining ride for the whole family. It comes from a place of unexpected sincerity and has been embraced by audiences (financially and critically) which is impressive for two reason: so many “video-game films” have been given an improper stigma around them and two, Sonic himself divided the internet when the awful first trailer showed off the original CGI design back in the summer.

Paramount and SEGA listened to fans and gave the hedgehog a more recognizable makeover, and the resulting fanfare shows that sometimes listening to the fans can pay off.

Jim Carrey nearly steals the show here as Robotnik, and operates with the kind of feral mad-genius intensity he gave to The Riddler in BATMAN FOREVER and the titular Ace Ventura- this Jim has been sorely missed. His Robotnik- or as Sonic christens him, Eggman- has a wild dance sequence set to the 1971 Poppy Family track “Where Evil Grows” that nearly becomes reminiscent of Joaquin Phoenix's Arthur Fleck as he has his mental breakdown in JOKER...but obviously more hilarious, and far less bloody.

Also rounding out the cast is Stillwater-native James Marsden (Enchanted; X-Men) as the 'gee, shucks' Sheriff Tom who longs to escape his boring, safe, town to become a cop in San Francisco. Tom is a great character for a family film like this- he's a hard working policeman who, we're told, worked 3 jobs to help support his wife Maddie (Tika Sumpter) through Veterinary School. Likewise Maddie supports Tom and all of his dreams, and their dynamic is refreshingly wholesome and doesn't wade into “naggy wife who faints when she sees the thing” and “dumb unwitting husband” most kid's movies seem to.

Tom and Sonic of course become quick-pals and the film handles some great themes like loneliness and opening yourself up to friends-accidental or not. Of course, the films great humor, warm heart, and funny visual gags help to pick up the slack between the lightning fast, colorful, and well directed action scenes that populate Sonic's first, but hopefully not last, adventure.

SONIC THE HEDGEHOG might be the greatest film ever made, and as a hardcore Sonic fan since I was in the third grade, I loved every minute of it, BOTH times I went (in Dolby in Wichita and in Ponca City). Kids in the audience cheered, adults cheered, and for once I think this is the definitive “fun for all ages” movie that comes along once in a great long while.