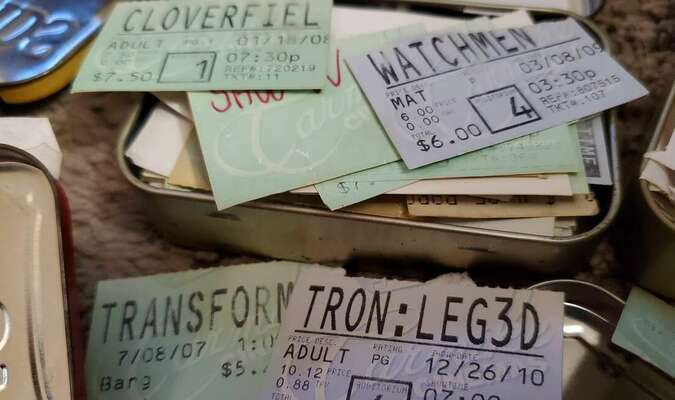 “For me, there is nothing more valuable than how people feel in a movie theater about a movie.”

Will Smith said that, once upon a ticket stub. In my lifetime I have seen 8 of Will Smith’s films in theaters, 7 at the AMC North Park 4 in Ponca City.

To count the number of films I’ve seen in that theater since my family moved here in 2002 would be impossible, but I can assure you that the five full Altoids cans of ticket stubs of every film I’ve seen could tell you. Those cans contain my life, as told in 3 inches of paper. Each with a time, a date, and a film. Each with a memory, each a relic of the past. I would wager 80% or more of those are from Ponca City’s AMC and the Twin Plaza, both of which are gone now. One, a pizzaria. Its silver screens torn down, and the seats exhumed.

The other is a fresh grave, where the smell of butter probably still lingers like a phantom, and the memories of more than 19 years of my life are entombed. First dates, last dates. Nights out with friends, afternoons alone. Holiday films with the family, individual days out with my mom or dad.

In the era of streaming, made even more prevalent by the pandemic, I get asked how I can still be such a Luddite when it comes to movie-going. I get asked how I can prefer the theater- full of screaming children, coughing, texting, talking, overpriced snacks- to the experience at home where I can pause the film for bathroom breaks, make my own food, mix a drink, and choose my company.

No “at home” experience will match the packed house midnight release of THE DARK KNIGHT in 2008 or the final Harry Potter film, or watching the Avengers all form for the first time together in 2012. Watching CLOVERFIELD in 2008 with every seat in the auditorium wide-eyed and slack-jawed.

Ponca City’s AMC was never the best theater. It was never the cleanest. The sound-system would blow out, the screen would dirty. The projector would often be out of focus. The soda would be flat or the popcorn stale. The seats were old, worn down by decades. The floor dirty. But that theater was home. That theater holds my most cherished memories, my most fun afternoons, my biggest regrets. Nights of youthful joy, dressing up in costume for the latest super hero craze with a group of friends that didn’t have jobs or bills, that didn’t have children or wives yet to worry about.

The death of Ponca’s AMC hit me especially hard, as it has been the first true stab of reality as headlines scream about film chains in decline...and driving by it the other night, staring at the parking lot covered in a blanket of ice and snow with the poster frames that once featured Hollywood’s biggest blockbusters illuminating nothing but the mocking white backdrop outside hallowed halls that once flashed with the entrancing neon flashes of the arcade machines and the concession stand now nothing but a gutted skelton...all beneath the glowing red letters of the AMC namesake...it broke me. It meant that I was no longer looking at a house of cinema...I was looking at a tombstone.

And this week, instead of writing a film review, I am writing an obituary.

Goodbye, Ponca City’s AMC. I will miss you tearfully, for the rest of my life.