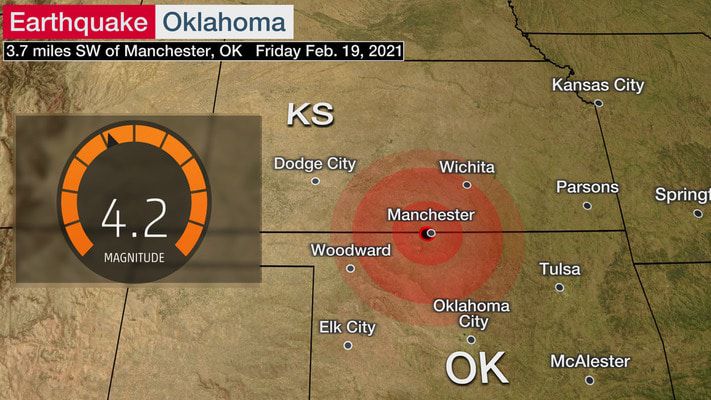 State officials ordered wastewater disposal wells in northern Oklahoma to cease operations or reduce the volume of wastewater they handle after a Friday earthquake rocked the region.

An 4.2-magnitude earthquake occurred at 7:56 a.m. approximately 3.7 miles southwest of Manchester in Grant County, the U.S. Geological Survey reported. The region is home to the Arbuckle rock formation.

Wastewater disposal wells pump water used in oilfield processes into the ground after it has been used.

“It is estimated that these actions will reduce disposed volumes by about 7,000 barrels a day,” corporation commission officials said in a news release. “Researchers are in broad agreement that disposal into the Arbuckle formation in parts of Oklahoma can raise risk of induced seismicity. Commission ISD directives since 2015 limiting or eliminating such disposal are among the actions credited with the sharp decrease in Oklahoma’s seismicity rate since 2015.”

The U.S. Geological Survey said Friday that the earthquake was one of the most significant earthquakes from around the world in the last 30 days.

Manchester is 48 miles northeast of Alva in Woods County and 55 miles northwest of Blackwell in Kay County.

No damage stemming from the quake was immediately reported.

The Friday quake was reported at a depth of 7 kilometers, and it came after a similar series of quakes weeks earlier.

Deadline closing in for April 6 elections in Bl...