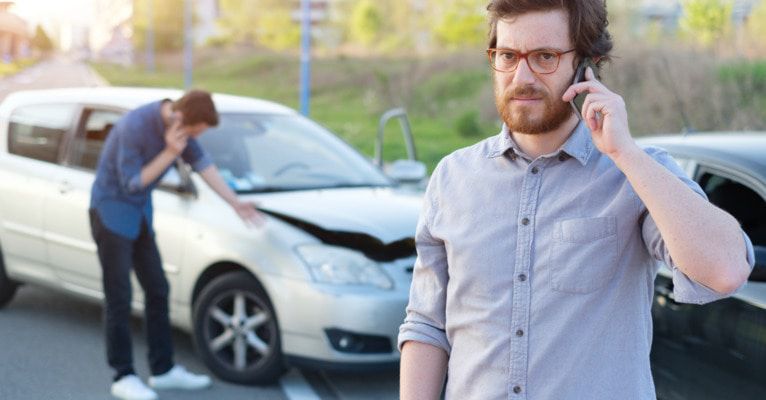 There’s a first time for everything.

I was leaving my dorm hall at Northwestern Oklahoma State University in Alva that morning to do two things. First, I had to go downtown to pick up an advertisement from a local grocery store for that week’s edition of the campus newspaper.

And then I had to report on a car wreck. That morning, with snow and ice covering area roadways, someone crashed into one of the university’s concrete signs. I needed to take a picture for that week’s paper, of course.

My situation couldn’t have been more ironic. As I was on my way to ultimately cover a car wreck, I had one myself. While leaving the university’s campus, I was driving down a hill covered in snow. Another driver was stopped at the bottom of the hill at a stop sign. I hit my brakes near the top of the hill, but I just kept sliding. I rear-ended him.

The other driver and I were fine. We were not injured. Both of our vehicles sustained only minor damage. I had a small dent in my front bumper, and the other driver’s bumper was bent. We swapped information, and I filed an accident report with the local police.

Then, I called my insurance provider in Blackwell, Farm Bureau. Doug Hodges and Lea Anne Stafford-Steelmon have taken good care of me, and they got the claim handled quickly and painlessly. I appreciate them greatly.

I write about this not to get pity — I don’t need any, and I wasn’t hurt in my accident — but to show that I, as a journalist, cover stories without bias or favoritism.

I report on car accidents from time to time. These are unpleasant, sensitive issues for all people involved. I try to be respectful when covering them, knowing that most people don’t intend to cause a wreck – and, subsequently, have their names in the newspaper.

I’d be a hypocrite if I only covered other people’s accidents, and that is not the kind of person I want to be. In this business, my integrity is all I have. I must protect it by covering all stories and all people equally.

So, here I am, writing a story about my own car accident.

Though this was my first car accident, I’ve been in a similar situation before; instead of reporting on the news, I was the news. Actually, it was my dog.

Last year, my dog got out from the backyard of my house in Blackwell. Derringer is a handsome, fun-loving black Labrador, and he went across town to play with some other animals. If I recall correctly, he befriended a herd of goats on his escapade.

The owner of the goats called the police department, and the police dispatched the city’s animal control officer. Derringer wasn’t causing any trouble, and he didn’t hurt any animals. But the goats’ owner was right to be worried that a dog could do harm. Derringer got to spend a little while in doggy jail until my mom could pick him up.

Every week, we print the police call logs in the newspaper. That week, my boy made the list. I’m not sure if I was proud of him, but I was thankful that he didn’t hurt anyone.

If he had read the paper, I’m sure he would have been embarrassed.

So, Friends, here’s to hoping you aren’t involved in an accident any time soon. Now that the winter weather has cleared up, it’s time to celebrate with a nice, relaxing afternoon drive.

But if you do wind up in an accident, look around you. I might be there with my camera, and then we’ll all be in the newspaper together.

SIDEBAR: Do you know what to do after a minor car accident? I didn’t, but I “winged it” and, somehow, got most everything right. Here’s some information from my insurance provider about what to do if you have a fender-bender of your own.

Stay calm. Keep your cool and be friendly to the other people involved.

Document the scene. Take photos of the damage to the vehicles involved.

Call the police. Even if you remove your vehicles from the road, report the accident to the police and make an accident report immediately. Stay at or near the scene.

Exchange information with the other driver(s). This includes their insurance information, the makes and models of vehicles involved and contact information.

Turn on your hazard lights if you’re blocking the roadway.

Never admit fault, even if you think you are at fault.

And, finally, thank your awesome local insurance provider for being so helpful.

That last one wasn’t on the list. But I’m sure it’s still the right course of action.