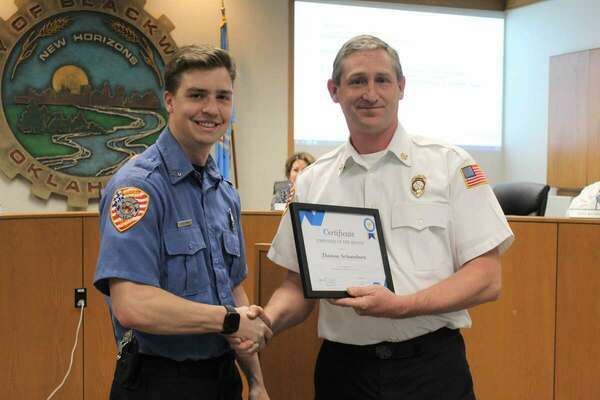 The Blackwell City Council met Thursday for a workshop at 5 p.m., where members of the Blackwell Tourism Board and representatives of the Blackwell Softball Complex spoke about recent controversies surrounding the tourism board’s funding as well as the usage of the softball complex.

Mayor Steve Marquardt and City Manager Janet Smith heard from tourism board members Mitzi Neuman, Cindy Oard and Kristin Brown. Council members also heard from crowd members, who shouted out of turn at Council members through the half-hour of discussion. Oard said this was “because they were passionate.”

City Attorney Bryce Kennedy read through changes on the funding agreement between the City of Blackwell and the tourism board. He said the tourism board would be given the option to choose which events to work and promote.

After more discussion, mayoral candidate and former mayor T.J. Greenfield approached the Council and said the tourism board’s original agreement could be revised and renewed. He said the disagreement was being made to be a “bigger deal” than it should be, and that the ongoing back-and-forth was wasting time for both the City of Blackwell and the tourism board. Oard and Neuman spoke again.

They talked about what the tourism board does and why they think it needs funding for events. The board participates at the Interstate 35 travel center, they said. The board provides $5,000 for the city’s Fourth of July fireworks, gives gift cards to lifeguards working on the Fourth of July, and gives $1,000 to the Kay County Free Fair, among other activities, they said. The matter was scheduled to be discussed further at the March 18 meeting of the Blackwell City Council. Two members of the Blackwell Softball Association then approached the Council to present a letter of intent regarding the softball complex.

Afton Diedrich said the softball complex shouldn’t be held accountable to maintain the fields throughout the entire year for the money it receives. She requested more money for the upkeep of the complex.

Marquardt asked if the fields had been maintained prior to Diedrich requesting their use. She replied that it didn’t make sense to maintain them if the softball season was in limbo. Greg Sixkiller, who is on the baseball board, was summoned by Marquardt to speak. He said the baseball fields on B Street were maintained throughout the year, regardless of which sports season was going on.

Scott Shepherd then said, “Our community is going in the wrong direction.” He said the original complex maintenance agreement had the softball association caring for the inside of the complex, but regardless of the agreement, the association worked closely with the city. Shepherd said volunteers and contracts don’t mix, and said that all programs throughout the city should work together.

Marquardt asked the Council to review the letter of intent and resume discussion at the March 18 City Council meeting.

The work session ended at 6 p.m., and the meeting of the City Council began. The first order of business was the recognition of the city’s Electric Department, Streets and Parks Department and Water Department as “Departments of the Month.”

Blackwell Police Department Lt. Gary Preuss as well as Blackwell firefighter and paramedic Thomas Schoenborn were recognized as the city’s Employees of the Month by Chief of Police Dewayne Wood and Fire Chief Cory Hanebrink.

The Council convened in executive session shortly thereafter. Council members reentered open session to announce that the City of Blackwell had approved a lease agreement with the Grand Lake Mental Health Center to set up a mental health site in the former Red Cross Building at the intersection of 13th Street and Ferguson Avenue.

Grand Lake officials are seeking a property in Blackwell for a full-scale mental health urgent care and clinic, officials said. Marquardt also revealed that the Oklahoma State Auditor and Inspector’s Office will not release its audit findings prior to April 6 so as not to interfere with the outcome of the municipal election.

An audit was requested in November 2018 by Kay County District Attorney Brian Hermanson to investigate “certain contracts entered into with the former mayor without following proper bidding laws.” Marquardt mentioned former mayor Greenfield and his G&C Concrete Company. The reaction from the crowd led to one woman being escorted from the meeting room.

Marquardt also announced the City of Blackwell had been alerted to a filing made by Wooderson Farms to amend its current water rights with the Oklahoma Water Resources Board, under permit 2014-060. The application requested additional water withdrawal from a diversion point on the Chikaskia River to be used by a Wooderson Farms, a Kay County irrigator.

The matter was resolved Friday afternoon. Wooderson Farms representatives told city officials they have no intention of going against their agreement with the city and the OWRB, according to a statement on the City of Blackwell’s Facebook page.

The statement went on to say the request was made because of damage sustained during flooding. The farm is attempting to restore its ability to get water for its operations. No additional water is being requested, according to the statement.