Review Repeat: VENOM (2018) is wacky, fun, and better than you think 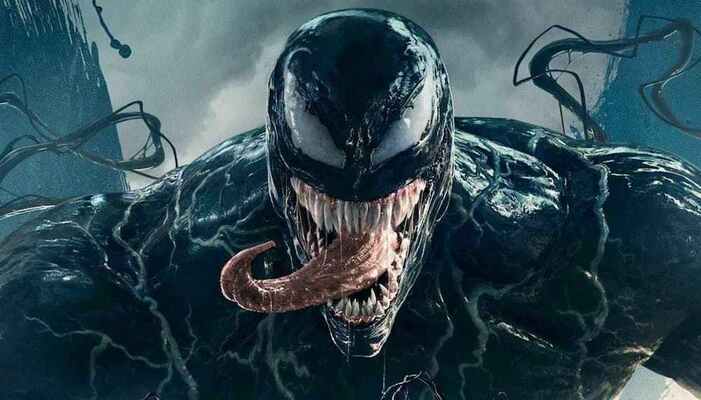 VENOM released in October 2018, and I absolutely love it, so here’s my shameless rerun. VENOM, directed by Ruben Fletcher, debuted to an overwhelmingly negative critical reception but a highly laudable audience score, further exemplifying the divide between critics and the people who actually enjoy movies.

This comic book film, based on the iconic Spider-Man nemesis, stars Tom Hardy, Michelle Williams, Riz Ahmed, Jenny Slate, and Woody Harrelson and it is, without a doubt, an absolute blast from start to finish. The film opens with a space shuttle from the Life Foundation (your typical scifi evil corporation) crashing to Earth with several nasty specimens in tow which are classified as “symbiotes”.

These nasty gooey things have personalities and minds of their own, and envelop the human body to bond with their “hosts” and either corrupt them to the point of a grizzly death or enhance their well-being. Tech billionaire and philanthropist Carlton Drake- a sleazy and charismatic Riz Ahmed- wants to harness the symbiote powers to give mankind a life beyond our own world.

Meanwhile, down on his luck journalist Eddie Brock (an enthralling Tom Hardy), ends up bonding with a black symbiote known as Venom who wishes to protect the world from his own kind.

VENOM is a ridiculous and entertaining time. I can honestly say I agree fully with a friend of mine’s assessment that Tom Hardy gives the best character performance in a blockbuster since Johnny Depp’s drunk and swaggering pirate Jack Sparrow from Disney’s PIRATES OF THE CARIBBEAN in the early 2000’s.

The movie feels like something freshly plucked from that same era- the mid 2000’s bliss of comic book action movies that didn’t feel the need to spend 50 minutes of it’s own runtime setting up cinematic universes and expanding spin-offs and sequels.

The main heart and soul of the film comes from the dual performances Hardy gives as both Eddie Brock and his alter-ego Venom, and it’s a laugh-a-minute improv session when Tom Hardy is on screen. His voice work as Venom is brilliant as well, and the two share not only great banter, but a great relationship.

Michelle Williams, who is a fantastic actress, doesn’t get much to do outside being “the girlfriend” which is heinous given her mainstream success in recent years such as Ridley Scott’s ALL THE MONEY IN THE WORLD and 20th Fox’s musical THE GREATEST SHOWAN, but she makes her role matter as Anne Weying enough that I’d love to see her come back. Riz Ahmed, who audiences may recognize from HBO’s “The Night Of” miniseries and recently ROGUE ONE: A Star Wars Story, is terrific as antagonist Carlton Drake and his zany batshit charisma really plays off Tom Hardy’s own equally zany, equally batshit, personality.

VENOM is full of faults is it particularly “good”? Not really. is it fun as Hell? Absolutely. Everything in this movie is so ridiculous, so exciting, that it demands to be witnessed. I honestly thought I was going to have to wait for the Bluray to catch it, but I had a wild hair and wanted to see it, especially after playing through the PS4 Spider-Man game.

If you want something that goes great with popcorn, you’d have to look no further than this exciting, dumb, loud, creature feature about two losers who bond over being outcasts before discovering the very thing they were meant to be: heroes.