Battle of the Greens: T.J. Greenfield and Julie Green face off for mayor seat 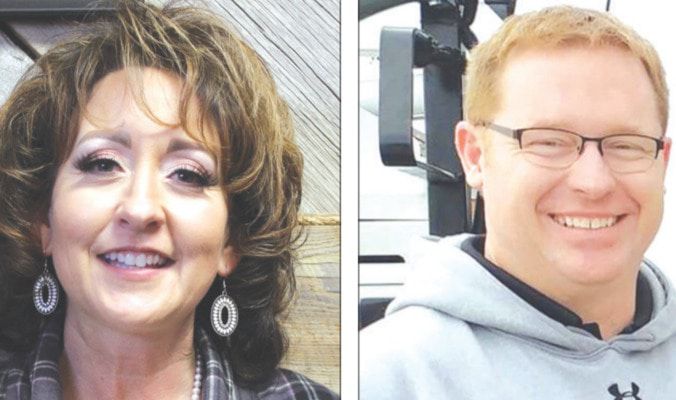 The city of Blackwell is bracing for another election, as T.J. Greenfield and Julie Green will face-off in Blackwell’s second mayoral race in just over a year. The election is April 6. Following the swift resignation of Glenn Cox after he won against former mayor Greenfield in late 2020, Ward 4 Councilman Steve Marquardt filled the position of mayor, while Julie Green was brought in to fill Marquardt’s position on the Council.

Green wanted to do more to help the community, she said last week at the medical clinic she and her husband, Phil Green, operate. Green’s Country Clinic is recognizable on east Blackwell Avenue thanks to a rustic tractor parked out front and eye-catching farm décor inside.

“That’s when Steve approached me about being on the City Council, and shortly after that, I had been approached asking about my interest in running for mayor,” she said. “I thought, what can I bring? Blackwell has a city manager who does so much work and a Council full of people that love what they do. That’s when I realized I can use this opportunity to really have a say, and to put my pride in Blackwell and my confidence in our community to use.” Green grew up around politics.

She talked about her father taking her to various meetings of the Beckham County Republican Party while growing up near Elk City.

She became a page for a state representative there. She and her husband made Blackwell their home in the early 2000s and have been in love with Blackwell ever since, she said. They have two children. “I never shied away from politics,” Green said, “and I certainly never backed down from any questions. It was always so interesting to me, and I loved being a part of it all.” Green said she believes Blackwell is on the right track, with business blossoming and work continuously being done to the city’s infrastructure.

“Every time you look, our water department, street department, electrical department, they’re always working on bettering our community and carrying out these projects,” she said. “That’s not even counting when severe weather happens, like floods and, recently, our winter storms, where they all come together, working tireless hours in the elements,” Green said.

“There’s so much unity here, and I think the City of Blackwell can really embrace that moving forward.” Green said a lot of people with opposing viewpoints in Blackwell who seem to be dividing the community can come together with her as mayor, allowing Blackwell to heal and have a unified future.

T.J. Greenfield shared his opponent’s viewpoint while he sat at his desk in the Hometown Realtors office on Main Street, finishing up work between his two computer monitors with folders and paperwork abound. Greenfield, a father and husband, reminisced about his own time in the Ward 4 City Council seat in 2015 before serving as mayor from 2016 to 2020.

“I never stopped working,” he said. “I spend a lot of my time keeping up with the local government, doing a lot of research. I’ve remained committed to the people of Blackwell, and that’s something that will never leave me.” Greenfield said he agrees that the community is divided and believes that healing will come soon. “During my time with the city, I worked with the voters to save our hospital, I worked with my peers to establish a long-term plan, and I worked with everyone around me to create an air of transparency,” Greenfield said.

“I worked hard to continue trying to improve Blackwell, and I believe that I can help bring not only industry into the city of Blackwell, but a voice as well. I have always been – and always will be – a person who makes decisions for the community, for the citizens, for the betterment of Blackwell.” Greenfield said his loss in 2020 didn’t cause his spirit for Blackwell to waiver, and that he was encouraged to run again for mayor. “I’m always available,” he said. “If people have questions, they can message me on Facebook. I’m available always, anytime, to anyone.”