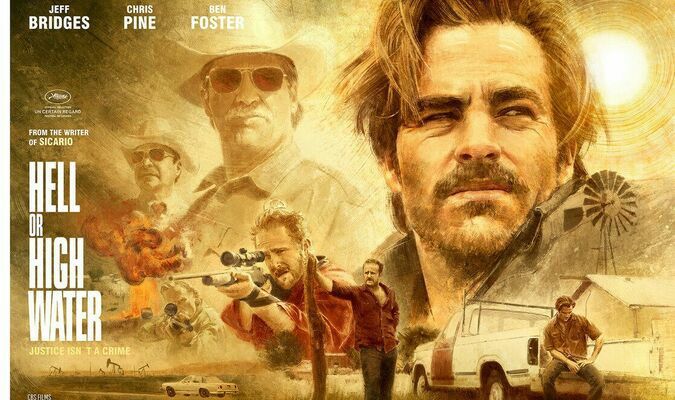 “Comanche? Lords of the Plains?”

“Lords of nothing, now.”

I recently rewatched the 2016 masterpiece HELL OR HIGH WATER for the first time in several years, and the film is as powerful now in 2021 as it was upon release.

Scottish director David Mackenzie paints a haunting neo-western from the pages of genre master Taylor Sheridan (Wind River, Sicario, Paramount’s Yellowstone series) giving us a bleak view of western Texas as two brothers Toby and Tanner (Chris Pine and Ben Foster) attempting to save their family ranch from foreclosure from the Texas Midlands Bank- the result of a debt left by their mother who passed after a long, tragic, sickness.

The brothers become heroes, Robin Hood figures, for robbing the banks that have been robbing the dust-bit old farmers for years.

Of course, they also earn the eye of the Texas Rangers who send Marcus Hamilton (Jeff Bridges) an old-timer facing the uncertainty and unease of his front-porch gazing retirement years and his partner Alberto (Gil Birmingham).

Eager to end his career in a blaze of glory, Marcus is hot on the trail of two brothers who grow more and more dangerous the closer they come to their goal. In HELL OR HIGH WATER we’re introduced to west Texas through sweeping, lingering, shots of dried up midwest towns with boarded windows, dust collecting on Main Street signs, and old billboards crudely slapped over with notices of mortgages, debt repayment plans, and credit lines.

The land and the people have been sucked dry by the banks, and it feels it in every way. Everything about the film exudes grit. You can almost pluck the sand from your teeth as you watch this bank-robbery odyssey go from bad to worse as circumstances shift like the winds, leading to one of the best written endings of all time.

There is a fantastic scene about halfway into the film where the brothers take a trip to an Oklahoma casino to turn their stolen money into poker chips- creating untraceable funds through gambling- where brother Tanner (Ben Foster) sits playing poker with a full table. Tanner is the unpredictable one- the loose cannon with a big mouth.

He makes a remark to a Native American man saying “Don’t chase me, chief.” The man removes his glasses, giving Tanner a fierce stare. “You a Comanche?” He asks. The man nods. “Lords of the plains?” “Lords of nothing, now,” the Native man replies.

There is a sense of generational loss throughout the film that is prevalent in a majority of Sheridan’s own work, especially in his TV drama “Yellowstone”. In HELL OR HIGH WATER, Chris Pine’s Toby is wanting to pay off the ranch’s debt to leave it to his children as a prospect of the future, the way it was supposed to be left to him and his brother.

There is a sense of taking, of trauma. This is encapsulated with one of the film’s best scenes between the two Texas Rangers Alberto and Hamilton where Hamilton looks fondly upon the one-horse town they’re staking out in an attempt to catch the brothers, reminiscing upon the “good old days”. Alberto responds:

“A long time ago your ancestors was the Indians until someone came along and killed them. Broke em down made you into one of them. 150 years ago all this was my ancestors land. Everything you could see, everything you saw yesterday. Until the grandparents of these folks took it. Now it's been taken from them. Cept it ain't no army doin' it, it's those sons of bitches right there-” he points at the Texas Midlands Bank branch.

There is a lot to unpack in HELL OR HIGH WATER, especially the question of what we’re leaving to our future generations... and exactly how we’re leaving it. It also invites us to think about the land we’re on, and if we can ever rightfully call it ours. Land we stole, stolen by us, packaged and sold back to us by the megabanks that populate Main Street.

HELL OR HIGH WATER was nominated for several Oscars including Best Picture and is available to rent on Amazon Prime, purchase on Bluray/DVD, or stream through Hulu