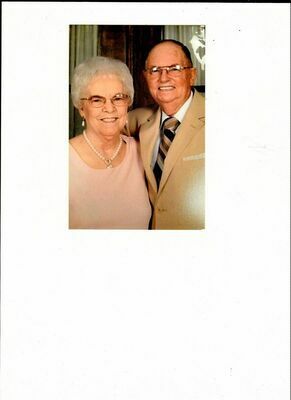 Jack and Donna (Casey) Bookout were married on March 21, 1951 in Bristow, Oklahoma.  They lived in several states during their 70 years of marriage settling in Blackwell in 1958.  They opened Bookout Upholstery Shop and were founding members of the 1st Free Will Baptist Church of Blackwell. Later Jack owned and operated Bookout Motor Company for many years on the corner of Main and College.  Jack and Donna have three children:  Bob & wife Vickey of Wewoka, OK, Becky and husband Larry of Guthrie, OK and Kevin and wife Shara of Blackwell.  They have 8 grandchildren, 15 great grandchildren and 2 great, great grandchildren.  The Bookouts will be celebrating their anniversary with family.