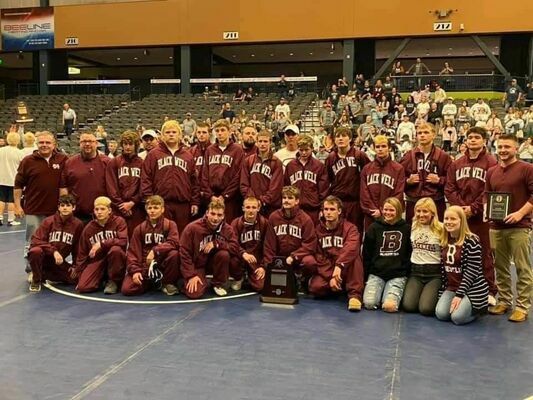 The Maroons beat Comanche and Jay in the first two meets of the day to set up a final with No.1 Marlow Saturday night. Marlow was too much for the Maroons and won 53-15.

“It was a great year, and we had a solid weekend. We had to adjust our lineup to beat Comanche and Jay to get a shot at Marlow. They were particularly good. We ended the year with third place at state meet and runner-up at the state dual meet and multiple qualifiers and state placers,” said Maroons Head Coach Connor Cline.

In the Comanche dual, the Maroons used their lower weight strengths to jump on Comanche. Jaxson Brown and Kasen O’Dell got quick falls to make the score 12-0. Evin Simpson who was named to participate in the all-state wrestling meet later this summer received a forfeit and Aiden O’Dell got a fall in 1:35 and the Maroons were in front 24-0 after just four weights.

Kolby Looper (195 pounds) would lose the only wrestled match in the upper weights 6-4 to make the score 36-23, and the Maroons would forfeit 220 and 285 pounds to make the final score 36-35 and allow the Maroons to advance.

In the Jay dual in the semi-finals, Cline moved some wrestlers around in weights to gain some advantages. The Maroons wanted to get some payback for the 39-29 dual loss on Jan. 23 and they would on Saturday.

Unlike the Comanche dual, the Maroons forfeited 106 pounds and Kasin O’Dell got pinned at the 5:06 mark to put the Maroons in an early 12-0 deficit. That did not deter the Maroons as they then won the next eight weight classes to take a 41-12 lead and then held on for a 41-33 win.

Simpson got the comeback started with a 58-second fall, followed by Aidan O’Dell posting an 11-2 major decision and the Maroons were within 12-10. Kaiden Ailey posted a 42-second fall at 132 pounds for the Maroons to take the lead for good at 16-12. Caleb O’Dell won a tough 6-1 decision for a 19-12 lead.

Looper dropped a tight 3-1 decision and Worthy Shepherd made his season debut coming off knee surgery at 195 only to lose on a fall. Logan Webb saw his first action in the semi-final but also lost by a fall and the Maroons forfeited 285 pounds for the final of 41-33.

The Maroons had a tall task against the No. 1 ranked Marlow team and never had the lead in the finals. The Maroons got a fall from Aiden O’Dell and decisions from Caleb O’Dell, Tanner Botts, and Christian Mora for their only points of the night. Marlow would get bonus points in nine of the ten matches they would win to cruise to the title.

In this year of COVID and with the way the season started with tournaments canceling and duals getting canceled, the Maroons finish 20-6 in dual meets, which is a great year. Now it is on to the summer season and the various tournaments and developing wrestlers to fill the gaps of the departing seniors.