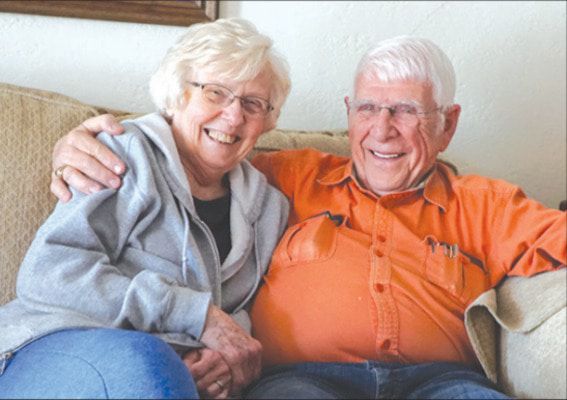 When Jim Willis was Blackwell’s city manager, he crafted the city’s budget and worked on infrastructure projects costing hundreds of thousands of dollars. But one of the most valuable things he’s ever seen is the twinkle in Karen Kincheloe’s eyes.

“I tell her she’s got a million-dollar smile,” he said. “That’s how she’s always impressed me, that instant smile.”

Both longtime Blackwell residents – and both widowers – they’ve known each other for years. In a quiet ceremony in Newkirk on March 9, they vowed to spend the rest of their years together. Willis, 86, and Kincheloe, 80, got married. “Something just ‘clicked,’” Karen Willis said.

She smiled at Jim. He smiled back. “And it’s been clicking ever since,” he said.

Karen and Jim first met each other while working for the City of Blackwell. Jim became Black-well’s first city manager in 1969, and Karen started working parttime at the public library around 1973. She remembers one day when she saw Jim while she was walking to City Hall.

“You were getting out of whatever you were driving,” she said to Jim while the couple sat together in the living room of her home, with sunlight shining in through a nearby window. “I had on a white blouse, a white shirt and khaki pants. And you said, ‘Boy, don’t you look nice?’ Khaki and white.”

“Really?” Jim replied with a laugh.

The two worked together when the library needed a new tile roof.

“That’s where I got to know him, and we’ve just been friends ever since,” Karen said.

Karen was born in Alva, and her family moved to Blackwell when she was 13. She married Jim Kincheloe in 1959, and they had three daughters: Julie, Jamie and Jennifer. Karen became the public library’s head librarian in 1990, and she retired in 2007.

She now works at City Hall. Karen said she enjoyed helping children dive into books at the library. “I hope I got them something they liked,” she said. “I loved that job. It was wonderful. I met so many nice people that are still friends. A lot of them have passed, but it was a super job. It really was.”

Jim Willis was born in Blackwell and attended the University of Oklahoma to obtain a bachelor’s degree in mechanical engineering. He graduated in 1958, and the Blackwell Zinc Company – once one of the world’s largest zinc smelters – hired him as a project engineer.

He married his first wife, Marilyn, in 1961. She had a son, Jay, who was 5 years old at the time. In 1963, Jim and Marilyn had a son, Nathan. They adopted a girl, Malynda, in 1971. In 1969, the same year Jim quit working at the zinc company, the Blackwell City Commission appointed him as Blackwell’s first city manager.

In 1975, he went to work for Blubaugh Engineering. He started his own engineering firm – Willis Engineering Consultants – in 1978.

He still operates the firm today, and he still enjoys the work, he said. He’s designed water and sewer line projects for the city, and he’s drawn up plans to repave streets.

A CHRISTMAS PARTY AND A PHONE CALL

Karen and Jim had both been happily married, they said, and they had both lost their first spouses. Karen’s husband, Jim Kincheloe, died in 2013. Jim Willis’s first wife, Marilyn, died in 1990 after a long illness. His second wife, Glenda, whom he married in 1993, died in September 2020 after a battle with dementia.

Both Karen and Jim were alone. But that would change.

“I get this call, and Karen said, ‘They thought it’d be a good idea to see if you would be interested in coming. Are you?’” Jim remembered.

Jim picked Karen up before the party and brought her home afterward. Karen said she’ll never forget what she did.

“I opened the door with my key, and I just pulled the door shut and shut the door in his face,” she said, laughing. “I don’t know. I was nervous.”

Jim said he was nervous, too. But soon thereafter, he called her and asked her to go to dinner with him. They went to a Chinese restaurant in Tonkawa. Only after the meal did Jim learn that Karen doesn’t like Chinese food, he said. “I’m learning her likes and dislikes,” he said.

Jim said he knew early into their relationship that he would ask Karen to marry him. Eventually, he did. They tied the knot a little sooner than they planned to.

“We finally went over to get our marriage license, and we just got married while we were over there,” Karen said.

With the help of Kay County courthouse workers, the couple called an ordained minister to officiate their wedding. The minister was at work in Braman, but told the couple he’d arrive soon. Courthouse workers also called two women to be witnesses. The service took place in a park in Newkirk. The minister showed up wearing a pair of shorts. And though Jim and Karen had originally hoped to exchange rings during the ceremony – they’d already purchased them – Karen’s ring turned out to be too big.

“It was really strange,” Jim said. “We were just laughing our heads off.” Once the ceremony was over, the couple had to pay the minister $60 and each of the witnesses $20.

Jim had already gone to an ATM and withdrawn the amount of money he’d have to pay, he said. He guessed it perfectly. There was just one problem. “We were short the amount of money we spent at the Sonic,” he said with a laugh. “So, we had to pool our resources to come up with $100.”

The couple came home with their legal documents finalized. They didn’t tell employees at City Hall about their union until the next day. They both said they remember the look on Hanebrink’s face when they gave her the news. “We call her the matchmaker,” Karen said. Later that day, City Manager Janet Smith sent a message to Willis, telling him to come to City Hall “right away.” There, workers had organized a surprise party for the newlyweds, complete with cake and drinks.

“It was so nice,” Karen said. “We were so surprised.” “They put that together in a matter of hours,” Jim said. “It didn’t take them long.”

‘IT’S JUST LOVE’ As they sat together on the sofa in their living room Thursday, Jim and Karen held each other’s hands, laughing and telling stories. They both smiled.

That’s what Karen says, too. “He’s just so kind, and he comes in the house and gives me a kiss,” Karen said. “It’s just love.”