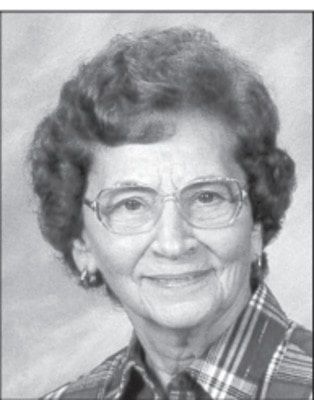 Betty was born to Cecil H. Dice and Rose A. (Frederick) Dice in Blackwell, Oklahoma. Betty graduated from

Blackwell High School with the class of 1943. She was married to Marshall Jack Klofkorn on December 18th, 1943 in Blackwell.

Betty worked as a deputy county clerk in Kay County, Oklahoma from 1943 until 1947 when she quit to raise a family. They moved to El

Betty was an avid bowler, golfer, and tennis player alongside her love for playing bridge. Betty was a member of the Women’s Club and a volunteer at St. John’s Hospital Auxiliary for over 35 years. Betty was widowed as Jack passed away in January of 1978. Her daughter Marsha R. (Klofkorn) Smith passed away March 2nd, 2019 after her son-in-law Gillbert A. Smith passed away on July 6th, 2013.

Funeral services will be Monday, March 22, 2021 at 10:00 a.m. at Parker Mortuary, Joplin, Missouri. Pastor Chuck Kralik will officiate. The family will receive friends at the mortuary Sunday evening from 4:00 – 6:00 p.m.. Arrangements are under the care and direction of Parker Mortuary.