Council and Mayoral candidates host forums ahead of April 6 election 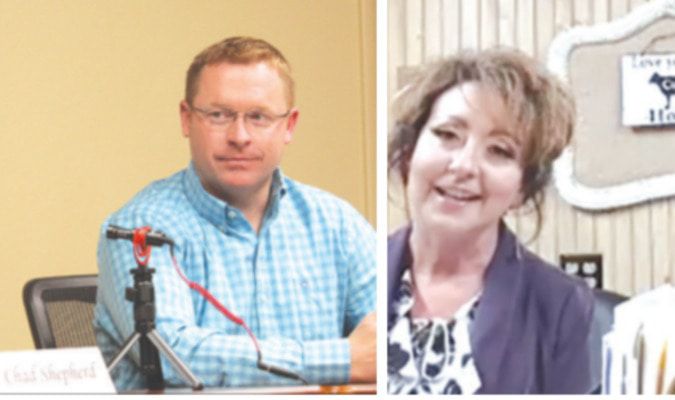 With the election only one week away, candidates for the mayor’s seat and the Ward 4 seat on the Blackwell City Council took to their respective stages and platforms to answer questions that voters have going to the polls on April 6.

The Blackwell Area Chamber of Commerce hosted Chad Shepherd and T.J. Greenfield, the organization’s executive president. The two are running for the Ward 4 seat and the mayor’s seat, respectively. The questions were asked by Megan Holden. Just a few blocks away, mayoral candidate Julie Green and Ward 4 hopeful Steve Marquardt hosted their own forum at Green’s Country Clinic via Facebook Live.

Green and Marquardt’s meeting began first with the question of why the two weren’t participating in the Chamber’s candidate forum. Green replied that Greenfield is a member of the Chamber and that Holden was let go by the City of Blackwell. Green also said some questions that are pertinent to Blackwell voters would not be asked at the Chamber’s debate.

She said the City of Blackwell has $15 million and the Blackwell Public Trust has $42 million. The two were then asked how they would ensure the local hospital reconstruction project wouldn’t go over budget. Green said the city is working closely with its chief financial officer, Frank Crawford. The next question asked was about a 10-year vision for Blackwell. Green said she was hopeful that Blackwell would see major improvements to its roads and water lines.

She also said she’s hopeful for a sports complex that would unite all of Blackwell’s organizations and bring in substantial revenue for Blackwell’s Hotel/Motel Tax. The two were also asked about housing development. Green said she was excited, saying the City of Blackwell purchased land on 13th Street that will soon see housing construction. She said Blackwell will see plenty of new faces and families, with nurses and doctors coming to work at the hospital. The two candidates were asked why they would like to run for office. Green said she wanted to see Blackwell thrive and prosper.

“It is possible to grow if we all work together,” she said. Marquardt said he brings experience with him, spending time in construction, project management and budgeting. Marquardt said the businesses in the city’s industrial park are thriving, and that local marijuana businesses are also vital to Blackwell’s prospering economy. He said he disagrees with those who view the booming business in Blackwell in a completely negative way.

At the Chamber of Commerce on Main Street, Greenfield and Shepherd took questions of their own. Both candidates were sent five questions in the mail prior to the forum. The first question asked what would qualify the two of them to serve. Greenfield spoke of his previous time with the city as both a councilman and mayor. Greenfield said he has experience with the “ups and downs” of business management and has been involved in several aspects of government.

Shepherd said he doesn’t have experience on boards or with how government operates, but said he’s worked at Kay Electric for more than 25 years. This, he said, has given him a grasp on how utilities and projects work. The next question asked the candidates about their top three priorities for the City of Blackwell.

Shepherd said his priorities are water lines, streets and electrical infrastructure. Greenfield talked about a 25-year plan that could be revised.

The plan highlighted water line repairs, infrastructure and housing. The two were asked what they felt Blackwell’s strongest assets are. Greenfield said the citizens are the biggest asset. “They make us who we are,” he said. “There’s truth to strength in numbers, and we’ve stuck together through disaster and victories.”