FREAKY is a gleeful and gory horror comedy 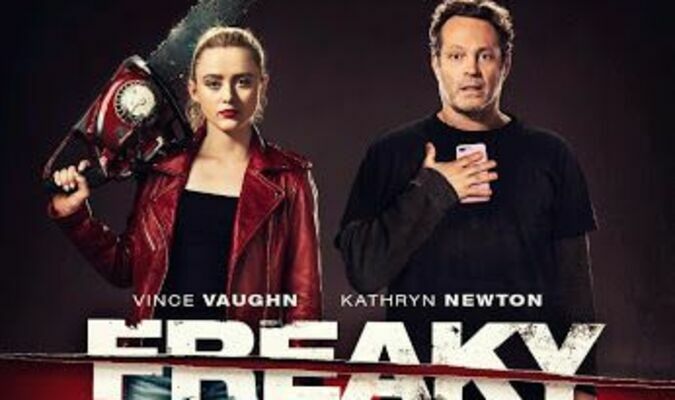 Now inhabiting the body of a 6’3” murderer while he has hers, Millie (as The Butcher) must convince her friends who’s who and find herself (literally) before it’s too late, and she’s stuck as the Butcher forever. The film is written by director Landon with collaborator Michael Kennedy, both of them sharing credits on projects like “Family Guy”, “Border Town”, the “Paranormal Activity” films, and another “updated” horror remake with 2007’s Hitchockian DISTURBIA.

The script is fun and light, allowing for some fun dialogue plays and scenarios. Millie’s gay best friend Josh comically screams to their other friend Nyla during one encounter: “You’re black! I’m gay! We’re so dead!” It’s the type of genre-savvy awareness that horror films like to play with such as Wes Craven’s SCREAM and it makes sense to do that here with such a silly premise involving an ancient Aztec knife, curses, and other mumbo jumbo.

Of course a slasher film is nothing without some violent kills, and FREAKY opens with a house full of hormone fueled horror fodder that get dispatched in fun ways by Vince Vaughn’s nearly wordless Butcher. The kills become a bit more sparse through the film, but the ones we do get are wickedly satisfying involving a girl being broken into a million pieces of ice and one involving a dastardly table-saw. FREAKY is more focused on the comedy, and even some genuine humanity.

The film comes out as a surprisingly “girl power” display of owning yourself in the face of doubt. Millie dresses in weird sweaters and bell-bottom jeans and has her room displayed with pictures of cats and boy bands. It isn’t until her body is occupied by The Butcher that she raids her deceased father’s closet and replaces her girlnext-door look with a ruby red leather jacket, high waisted jeans, and a pitch black shirt with kick ass boots to carry her down the halls at her high school, being oggled and envied.

“Woah, what am I wearing?!” Millie asks (as the Butcher), exasperated. Her gay friend Josh gives Millie’s body a once over and then says “I’m actually really loving this for you.” Millie fully embraces the change and the “new her” by the end of the film when the two leads are swapped back into their own bodies and Millie uses her experience to one-up the Butcher in a dramatic confrontation that truly does leave you on the edge of your seat.

FREAKY does a great job at wading into the tropes and turmoil of the horror genre but coming out as it’s own hip product. The film is a fun watch, and I would highly recommend it.