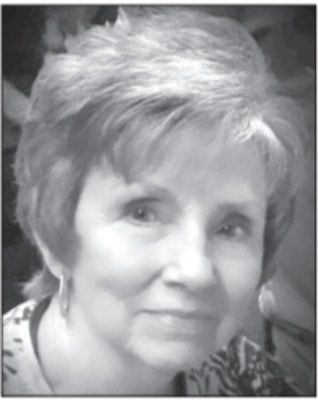 She grew up in Blackwell attending Blackwell Public Schools and graduated from Blackwell High School in 1954. On November 20, 1954, she married Leo Raymond Canaday and began serving her family in many ways, including being the family’s number one cheerleader which continued with her great grandchildren as well. She always attended their various school programs and athletic contests and captured many pictures and 8mm video. She made many dresses for her daughters including prom dresses. She loved playing games around the dinner table and enjoyed them with laughter, even to the point of happy tears.

The family enjoyed her special “Canaday” pancakes and she cooked the best burgers ever. She was an avid gardener and loved spending time in the back yard. Her greatest gift was her devotion and love for her family. She was a member of the First United Methodist Church, the United Methodist Women and the Red Hat Club all in Tonkawa. She worked in the church booth at the Kay County Fair and assisted in planning the funeral dinners for church members.

Pat also served as a volunteer delivering meals on wheels and as a poll worker for the Kay County Election Board. She is survived by her two daughters, Lisa Canaday and Joseph Morin of Key West, Florida, and Vicki Hardesty and husband Allen of Ponca City; grandchildren, Tyler Hardesty of Ponca City, Kamille Case of Tulsa, and Zac Hardesty and wife Kailee of Yukon; great grandchildren, Kylee Hardesty, Mikaela Hardesty, Leo Hardesty, Hannah Case, Wyatt Case, Molly Case and Cooper Hardesty; and many nieces and nephews from the Smith and Canaday families.

The family would like to thank Dr. Oatman and the staff at Ponca City Nursing and Rehad for their kind and loving care of their mom for the last eight months. Also gratitude to the doctors and nurses at Alliance Health who cared for her during her hospital stay and to the staff at Hospice of North Central Oklahoma.

Memorials can be made in Pat’s honor with the Leo Canaday Memorial Scholarship Fund at Northern Oklahoma College, Hospice of North Central Oklahoma or the Evans Children’s Academy of Performing Arts at the Poncan Theatre in c/o Roberts and Son Funeral Home, 120 W. Padon, Blackwell, Oklahoma 74631. On-line condolences can be made at www.robertsandsonfh.com